A person can’t help but feel good all over about their imperative statement which was printed on that year’s annual report cover, “—to thrust our collective power toward the elimination of racism wherever it exists, and by any means necessary.”

This is quite a contrast from what is going on over in Idaho, where a so-called Christian organization calls themselves Neo-Nazis. Their sworn duty is to keep the banner of race violence going at full blast. Just like what has been going on for ages.

On the bright side, the majority of us live with lots of love and tender care in our hearts, and wouldn’t harm a soul intentionally. However, some of us did take up debunking. But the road of debunking can be a lonesome one. For every myth a person destroys can isolate a person from the community of believers. So it’s best to settle down and respect the sacred beliefs of others.

But a few didn’t care to give up that easily, and probably never will. For example: There is a predominate free thinking housewife whose name is Ruth Miller. She has the ability to destroy myths. “Show me a dogma, and I’ll tear it apart,’’ she says.

For the benefit of her children, Ruth did return to the world of the church. “I tried the Baptist,” she stated, “They worried too much about religion. Everyone in our family had only been born once.”

Then she tried the Unitarians. There she thought she found heaven on earth in the sanctuary of kindred souls. For a while Ruth was with glee in her new found community.

But it didn’t take long for Ruth to discover that the Unitarians welcome Humanists, and encourage them to hold membership in a liberal political party; . . . welcome atheists, especially if they support ERA . . . welcome Christians if they can learn to relax.

Not very well pleased, she looked at her primary source material and found out that her community of religious liberals contributes to a dogmatic political journal.

“Take note,” Ruth said, “There is a debunker in your midst, and I intend to continue my lifestyle. This Unitarian is a registered Republican, anti-ERA, is supported by a military paycheck, and evil of evils, smokes in public!”

It’s easy to see that no one denomination can please everyone. Maybe that’s why there are so many different breeds of churches.

Whether you agree to disagree, college professors can also add food for thought. Chris Sublett, an art teacher out at Cheney is one of them. The professor became friends of the Jim Gooleys when Jo was one of his art students. This gave Chris a chance to take loads of farm pictures out at the Gooley's and Mielkes’ farm. Later Sublett had his prize photos on display for a month in downtown Spokane, including a framed-in statement of knowledge which read:

"If man’s imagination were not so weak, so easily tired, his capacity for wonder not so limited, he would abandon forever his dreams of the Supernatural. He would learn to perceive in water, leaves and silence more than sufficient of the absolute, and the marvelous, more than enough to console him for the loss of the ancient dreams.” 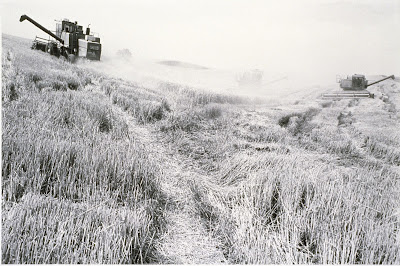 Late artist Chris Sublett created photographs, drawings, jewelry and sculptures. He grew up in Quincy, Washington and attended Quincy High School. He received a Bachelor of Arts degree from California State University, Long Beach. He received a Master of Fine Arts from Cranbrook Academy of Art in Michigan. He taught at Eastern Washington University in Cheney for nearly thirty years, retiring in 2002. arts.wa.gov