There is evidence that lifting wheat sacks can either make or break a person. Example: Years ago, ‘Wolf' Boyk, and his future brother-in-law, Ralph Brown, were taking in wheat at the Rocklyn warehouse. Both were models of physical fitness. Between loads they would practice basketball shots in the hollow end of the warehouse. During midday I complained to the two athletic minded guys that lifting wheat sacks could in time wreck us. Wolf insisted it was making him stronger. He wanted to bet he could lift a 130 pound sack over his head. It was worth a small wager, so I got my movie camera from the truck to register the momentous event. The feat was achieved, but Wolf Boyk developed an instant hernia that eventually sent him to the hospital.

Of course, there are exceptions for those that successfully handled wheat sacks throughout their weight lifting years. Old Ed Deppner, Rocklyn’s well known haymaker, is the only person I know personally who spent a very large part of his life lifting wheat sacks. Even though it took its toll, he still has a very workable back.

Mr. Deppner started piling sacks of wheat in 1915, when Mike Maurer, Ed Boyk, and Herman Bursch built a warehouse at the Rocklyn station. Deppner’s part time summer job outlasted five wheat buying managers. Throughout those years of devoted work, Deppner has lifted thousands upon thousands of sacks of wheat. His energy helped build many wheat piles both inside and outside the warehouse. Especially in 1923, when the outside stack of sacked wheat outstretched the warehouse by twice its length and four times as tall as Ed Deppner.

How come this 91 year old guy survived those years of lifting wheat sacks? I don’t know. However, he now complains that his neck hurts when he turns it. It could be from looking behind to see what his dump rake is doing when he is raking hay. Keeping his head forward when feeding his cows this winter should remedy that. 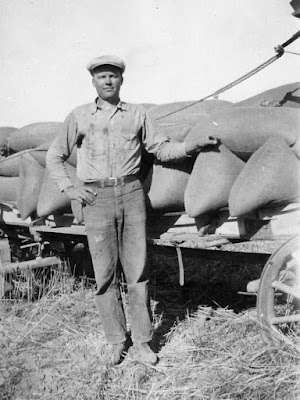 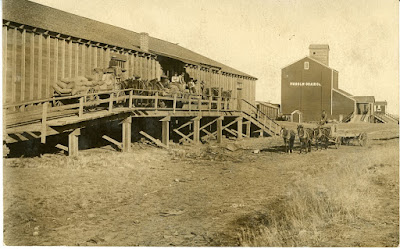