All Plugs Were Pulled

Nowadays, every weekday is the same in downtown Davenport. The two grocery stores stay open to 9 p.m. throughout the year. The mobility of people only varies on Sunday when the shoppers wear a more leisure look as they stroll down the shopping lanes and later pick up the Sunday paper.
Years ago, between the time when the Kaiser started raising hell and up to Hitler’s wild slaughtering spree, all stores closed during the weekdays at a respectable hour. Sunday was a tight day; everything was locked up solid.
The blue nose law did allow the drug stores to stay open. After all, most lawmakers did not like to deprive themselves, let’s say, an ice-cream soda, or maybe a cigar to chew on after church.
But, on Saturday night during the summer, all plugs were pulled. Nearly every store in Davenport left its doors wide open, including Tobiason’s Saddle and Leather shop, until the 9 o’clock bell rang.
There were five grocery stores in town during this period, Piggly Wiggly, Burgans, Allen’s Grocery, H.H. Granger Food Supply and the Farmer’s Store that was run by the Campbell family. In those days most Davenport food outlets did not let you gawk around for your staff of life.
When it came your turn, the clerk would look over his glasses at you, with his ever-ready pad and pencil in his hand, and ask what you wanted to take home. If you said three cans of corn, he would wet his pencil and write down three cans of corn, and put the price down just to the right of his pencil. When you finished reading off your list, the clerk would walk around in different directions filling a box up with your pre-dictated order. If you were not a deadbeat, you could pay for it later. [*]
"Looking For The Heart Of Saturday Night"  Kik-Backs, page 55, part 1 (continued)     (home) 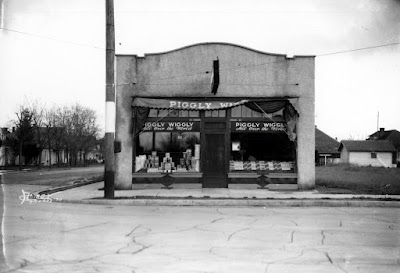 Charles Libby Collection / NorthwestMuseum.org
* Piggly Wiggly stores were the first in the country to with open shelves where customers could serve themselves.
PigglyWiggly.com 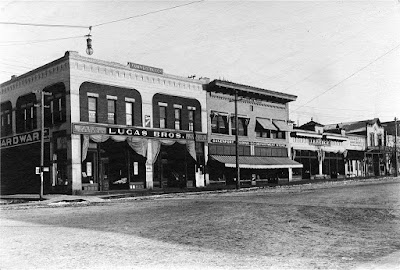