Where The Kiks Now Point Their Feet

Things were different when a lot of us older ones got born. There was no high technical equipment setting in the doctor’s office. When a call came in that a baby somewhere was about to be born, all that was available for the doctor to grab, was his little brown bag and a pair of pulling hooks if it happened to be an instrument baby. Then down the country road he would go.
When I was a year and a half old, in the same bedroom where Sugar and I now spend about a third of our time, my sister was born. That blessed event of long ago happened near the spot where the Kiks now point their feet when they are asleep. Twenty four years later, sister Ethel gave birth to daughter Evelyn in the same bedroom, and I believe in the same bed that Ethel was born.
So far, Sugar has never used the birthing room.
At the tail end of harvest 51 years ago, time was approaching for me to become an uncle. When count-down started, my sister packed her things and came back to the place of her childhood days so she could make mother a midwife and grandmother at the same time.
Late that afternoon when things began looking like motherhood was approaching, mom called Doctor Sewell. The doctor hurriedly shoved down an early supper, and drove out to the farm.
Upon arriving, Sewell took charge by checking over the soon to be mother. He told Emerson, the father-to-be, to keep his shirt on; that it could be quite a while before things around here would start to happen. The atmosphere calmed down and most everyone started socializing over some coffee with the doctor.
Wednesday nights at the movie house in town were drawing nights for cash prizes. So I snuck out and went to see the movie “Wagon Wheels.” After watching a lot of Indians shoot arrows at some covered wagons, I was anxious to find out if the baby had arrived. It didn't take me long to get home when the last prize was drawn.
As soon as I entered the house, I knew the baby hadn’t been born yet. Emerson and the doctor were discussing past football games. The front room was stuffed with cigarette smoke. “We are still waiting,” the doctor told me as he got up to check on sister.
This time Doctor Sewell didn’t come out of the bedroom, instead he called the excited, soon-to-be-father in to help administer ether. Doctor’s theory was to put Ethel into semi-dreamland so she wouldn’t feel all the necessary pains of the baby being born.
A lot of ether missed Ethel’s nose and traveled right up into Emerson’s nose. It caused future father to pass out, and he had to be helped to the upstairs bedroom.
When the clock was close to striking midnight, the voice of baby Evelyn was heard. Emerson slept soundly through it all and didn’t learn ’til breakfast time that he had finally become a daddy.
"Home Delivery" Kik-Back Country, page 20 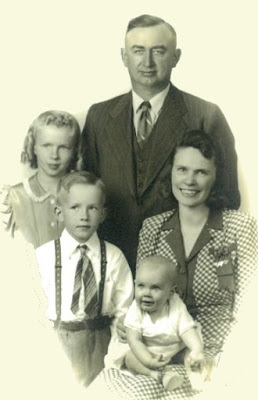