Shaking With Excitement and Disbelief

The last time the old fairgrounds was used was when Rocklyn had enough energy to produce a baseball team that shook the sports world by knocking the socks off of the unbeatable Davenport team 50 years ago. Davenport was celebrating the Fourth of July that year of 1932. They wanted a ball game, and Rocklyn was brave enough to challenge Davenport.

Gov. Martin was wandering around the Inland Empire that day. He decided to stop and plant himself in the grandstand to witness the excitement. The governor was spotted by the Davenport High officials and was asked to umpire the third inning. Realizing this would make his constituents happy, the governor obliged. He did OK, except he was built too tall to see some of those low-pitched balls.

The game turned out to be a sizzler. The Rocklyn team was shaking with excitement and disbelief as it outsmarted Davenport. Tension mounted to where Emerson Boyk had to call in a substitute umpire. This caused sparks to fly. Herb Rohlman, a Davenport player, lost his cool and took a swing at Ford Schumaker, the relief umpire. In the middle of all this excitement, Gene Boyk's fancy pitched ball bounced off the bat of Davenport's star player, Bob Masenthine, and landed on the Adam's apple that belonged to our skillful catcher, Herb Kruger. To this day, Herb says his Adam's apple has never been the same. 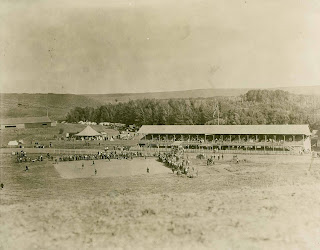 Baseball Game at Pioneer Picnic Grounds
Photo from WashingtonRuralHeritage.org
(These are not the fairgrounds mentioned in this story.) 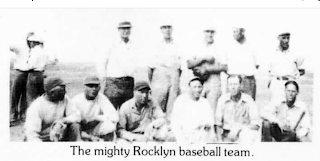