Rattlesnakes Were Getting Jittery

Now let’s go back to the spring of 1933. The nation was in a heck of a mess. Wheat price at the warehouse was only 25¢ a bushel. Franklin Roosevelt was just getting things organized. Rumors were out that a big dam might be built north of Wilbur. I went to an anti-dam meeting where a speaker was asking us, “Who will buy all that electricity? Jack rabbits?” "Ha-Ha," came the sounds throughout that crowd.

On January 26, 1933 the editor of the Davenport Times stated it would be a waste of money to build this Coulee Dam, and that it would be idle thinking that there would be a sale for this power. One must realize that it was no fault of this early day editor to think that way. The country was flat on it’s face, so planning a dam as big as the Coulee Dam just simply scared the wits out of most people.

A story got out nationally that if they built Coulee Dam it could fill up with silt in about a hundred years. In answer to that tale of woe, Will Rogers said, “What if that dam does fill up with dirt? By that time the Republicans will be in power and we won’t need that dam.”

Rumors soon faded as there were just piles and piles of people out of work and hungry. Sheriffs were busy kicking farmers off their farms, and something had to be done. Excitement ran high in 1934 down at the Coulee. Shacks were getting nailed together, people were walking around in all directions, and the rattlesnakes were getting jittery.

That summer Roosevelt promised Dill he would swing around to the northwest and take a look at this project. So on August 7th I picked up my dad and neighbor, Carl Jensen, and beat it down to Grand Coulee where all the excitement was and to see in the flesh all those big shots who promised to bring paradise to our promised land.

A large wooden shed-like stand was built on a sandy spot about a couple of miles from the river. Golly, it was a hot and dusty day. We all stood up like a crowd does at an auction sale, except all heads were pointing toward Ephrata . . . waiting.

Finally we were rewarded with clouds of dust. All at once about a dozen cars popped through the haze. Dill was riding with Roosevelt, as was Senator Bone. Banks, Sullivan, and other promoters from Ephrata and Wenatchee were crammed in smaller open-top cars.

Dill, before the main event, looked rather excited, and seemed like he could hardly wait to say something. Finally when his time came, he gave a thundering speech about Roosevelt, the builder. Finally he introduced the President.

All this time, Roosevelt was able to stand up by leaning against a post just back of the speaker’s stand. I expected to see a long cigarette holder sticking in his mouth, but got fooled. I can’t remember what all Roosevelt said, I was too busy just gawking at him. His speech gave me hope. We all applauded when he said he was going to make the Nation “dam minded” (A slight bit of humor).

Before driving back to Ephrata, Dill, Roosevelt and part of the gang drove down to the dam site and rode the cable ferry across the Columbia and back just for the heck of it. All in all, it was a day I’ll always remember. Can’t help but think how time takes its toll. Senator Dill was the last of the big wheels to cash in. He died on January the 14th, 1978. 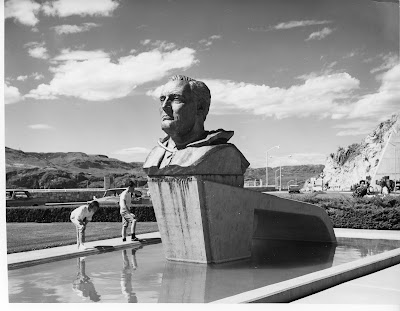 FDR Statue at original location...east side of dam 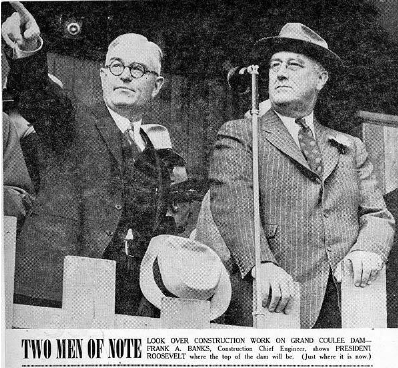 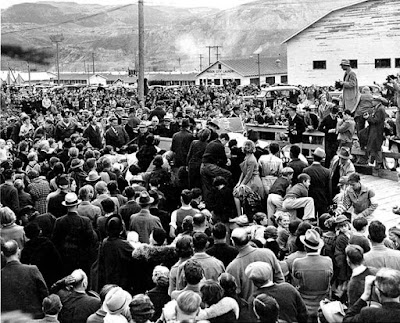 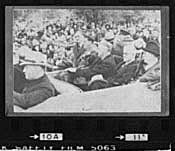 FDR in motorcade at dam
Rufus Woods Photograph / DigitalCommons.cwu.edu
(I wonder why this negative is not enlarged.) 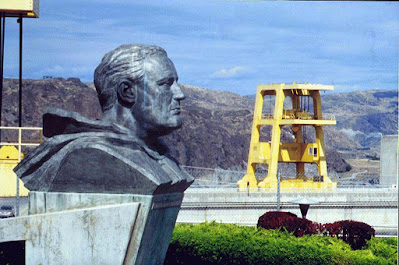 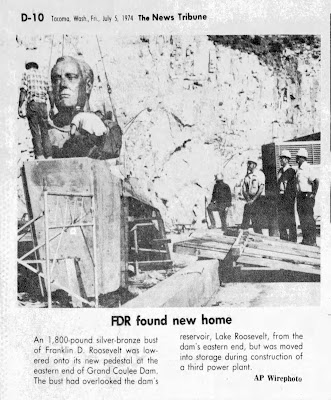