Migration to the west brought its share of bachelors as well as family groups, all of them looking for choice spots to stick their plows into peaceful bunchgrass sod.

Reminders of the past are driven home as one jogs or drives past the skeletons of a vacant farmstead. Sad as it is, time will cover up all the traces of our first citizens.

The prairie bachelors (usually not by choice) were an interesting breed. These singles settled in spots between the family farmers throughout the Big Bend country. Except for kids, they produced the same kinds of crops as their less lonely neighbors did.

I grew up in the shadow of our famous Rocklyn bachelor, Bill Chappell. In 1882, Mr. Chappell began his adult career as a flunky and saloon bouncer in Denver, Colorado. Lots of saloon guys began giving Bill black eyes with their fists. It didn’t take him long to realize he was in the wrong profession, so he hit the trail for the open country.

Within a year his wanderings and snoopiness took him to Harrington, where he regreased the axles on his wagon and bought an old walking plow from a homesteader.

He headed north, swearing that if he could not find water after digging a 10 foot hole, he would move on to a better spot of land to pick for his homestead. Bill let some excellent farmland pass under his feet because his shovel could not bring forth water.

Finally, the fourth day out of Harrington, Chappell reached the Rocklyn corner, Highway 2 and the Rocklyn road, where he struck water at about the length of his shovel handle, causing Bill to file a homestead claim at once. A wagon load of boards was then turned into a 10 by 14 foot homestead shack. He was now the proud owner of a mortgage-free prairie castle.

The summer of 1884 found Bill Chappell wearing out his clod-hopping shoes by following the foot-burner (the walking plow). He broke out quite a chunk of sod. Then his prairie life became short-circuited when the call of the Klondike Gold Rush in Alaska got to his ears. Gold fever then set in.

His ponies were sold and a crossarm was placed on his homestead shack’s door. A boat from Seattle got him to the Klondike country. Finding no gold laying around that was handy to pick up, Bill began noticing a lot of wild-eyed, hungry-looking gold seekers walking around in every direction. It got Bill to thinking there could be more money in selling these guys something to eat, so he started a fast-food service.

He found a frying pan where a miner was shot up in a dispute. A pit stove was made and Mr. Chappell was in business. He had the guts to charge those hungry miners $4 for three stove-lid size pancakes and a $1.50 each for a fried egg. When the eggs were in poor physical condition, scrambling did the job for the same price.

Like oil, when the gold pooped out, Chappell wandered back to Rocklyn. Gus Deppner, from the Deppner tribe, invaded Rocklyn country while Bill was gone and jumped his claim. In order to get his homestead back, he had to buy Gus out. It took all the dough he made in Alaska. 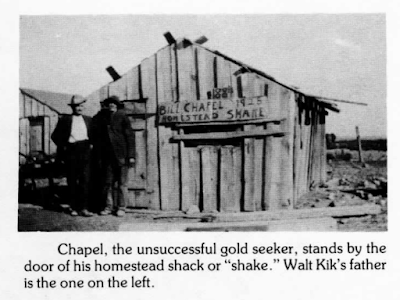 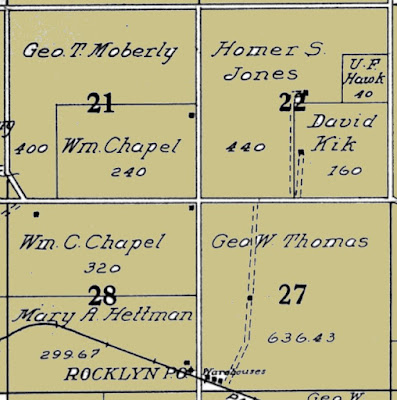 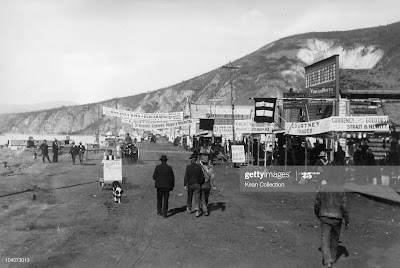