When Time Levels Us All

About three and a half miles north of Creston, on a sloping hillside, lies a three acre patch of virgin soil, bunch grass and all. Out in the middle of this wind-swept spot, early settlers buried half a dozen of their dead. There is a mid-twentieth century body up there, too. It was buried about 30 years ago, bringing the total, among the dead, to seven.

A tumble-down wood fence that was once over a grave, lies twisted off to the side. A knocked over granite plaque can be seen deep in the bunch grass near the spot of two buried children. A body of a young wife has been in the ground since 1886. A grandfather’s grave is next to his three grandchildren of tender age. Off to the side of this sparsely occupied site, near a clump of rye grass, stands a [marker] hewn out stone. It probably marks the grave of an unknown body.

It appears the mourners are all gone now and are buried elsewhere. The native grass is finally enjoying its undisturbed life, as it has for eons.

A lot of history lies buried in every discarded cemetery. Some lives ended in such a short span of time. No wonder we humans like to believe in a transformation of some kind. After all, we are the only species on earth that recognizes pending death.

Even a believer in a hereafter sometimes fails the shock test. A number of years ago, Sugar and I had the chore of letting a distant neighbor know that her brother-in-law had passed away. Having no telephone in that part of Rocklyn, we drove down. Upon telling her the tragic news, she sat down and kept repeating, “We will see him no more. He is gone forever!”

Guess the shock sometimes brings out the instinctive reality of life’s permanent end; although her sudden, fading faith may have returned later.

There are lots of ways of saying a final goodbye to a loved one. A well known retired minister told me of a funeral he once presided over where the deceased was not put on public display. This minister has the reputation of handling problems properly. Thinking wisely, he arranged the service message by emphasizing that the deceased body is no longer his, as he is now with his Maker. Even after planting that seed in the mourner’s mind, the minister was surprised when several wanted to see ‘good old Joe’ for the last time.

The passing of actor, Henry Fonda, brought back memories. About 50 years ago, Henry played the role of non-conformist, young Abraham Lincoln. In one touching scene, Fonda sentimentally portrayed Lincoln at the grave of his youthful sweetheart, who had passed away the year before.

The cemetery was by a river. It was springtime when long-legged Abe sat up against a tree by the grave. He had a wild flower in his hand as he fantasized talking to her. Lincoln told her the spring thaws had risen the river flow once again, and that the first wild flowers were out. After telling her he wasn't doing so good without her, he kissed the flower and placed it on her grave. That scene cracked me up emotionally.

Burial spots of loved ones carry a very haunting feeling of separation. When time levels us all, grave stones will then just become records for the future generations to view. 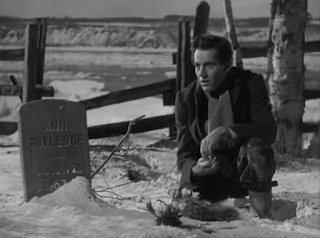 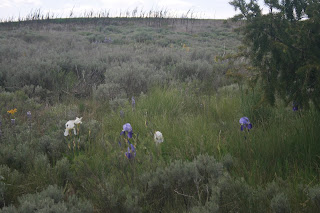 "Out in the middle of this wind-swept spot..."
Brents Cemetery, Creston
Home