It Was Made To Order For Him

Once upon a time, there lived a little known settler, and his wife of long standing. They located themselves down in a hole between the Maskenthine estate and the farm that made me happy for all these years.

Wood Hulbert was his name. He was a cynical atheist who liked to argue. However, he was a man of some faith. He believed that the copper bracelet he wore was sucking out a lot of his arthritic pains.

Since it rains on the just and the unjust, his wheat fields yielded the same as his more righteous neighbors did.

Because his farm was small, it held a small field, a small pasture; and a small number of cattle. With luck, Wood was able to scratch out a living.

But he was rich in dogs. He owned an advancing army of dogs. These ruffians would come charging over the hill at anyone who dared to make their way to the Hulberts.

In his later years, Hulbert became sort of a gloom and doom guy. He predicted that those Odessa dust storms would wipe out all of the Big Bend Country. He used to say, “They should never have broken out all this land. This country was made for cattle.”

When Mr. Hulbert was full of fire, and at his high point in life, he opened up a one man industry. Ice farming! It was made to order for him. A spring-fed pond was already there.

All winter long this pond was producing ice that went to waste when spring came. By installing a high dam, beaver style, Hulbert was put into an enterprising business.

Harvesting ice didn’t require much of an investment for Wood. His scattered odds and ends were easy to convert over to putting up ice. Wood’s harvest machine was his arm muscles. They supplied the power to his long jagged ice saw. A bobsled served as transportation for storing ice on the farm. A discarded shed, and lots of sawdust kept the ice from disappearing.

In the early days, Davenport never did like warm beer, or meat that was ripening too fast. This gave Mr. Hulbert a chance to monopolize the ice market. Price wise, seasonal highs were reached in July and August. When it got cold, the ice market hit bottom.

On hot days, old Wood Hulbert did enjoy a cooling ride into town with his wagon load of ice. However, like cattle, some shrinkage took place in transportation. 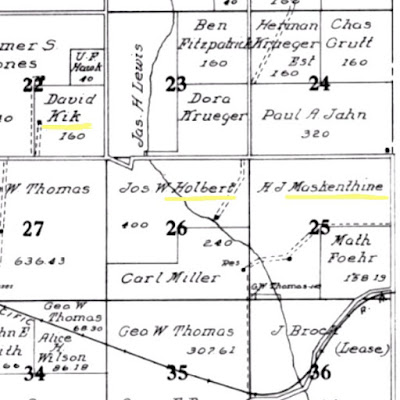