Can't Get All Glued Together

As a youth, listening to Charles Faldborg was a pleasure. His stories of the Wilbur country held one’s interest. Seeing Wild Goose Bill through his eyes was genuine. His relationship with the Indians should have been recorded. Then there was a story that I can’t get all glued together at this time.
This event probably happened around the Hartline area, before the railroad was built. A guy with a lot of know-how and his horse was hired to map out a rail route from Coulee City to Cheney. This surveyor was not in love with the country between the Coulee and Wilbur. He thought it was the most worthless piece of dry space ever put together by nature.
On a hot summer day east of the Coulee, he was busy marking locations when his canteen ran out of water. Through the wavy heat, he saw a homestead house shimmering in the distance. Upon investigation, he found a lonesome woman of high intelligence. Her husband had died that summer from drinking typhoid water, leaving her with no thoughts other than to pull up stakes, and go back east where she came from.
After reporting to his superiors in Spokane, this surveyor couldn’t shake the widow from his mind. It didn’t take him long to think he could learn to like that God-forsaken country above the Coulee, and it didn't take him long either to ride back and win her lonesome heart. This made it possible for him to start fixing up the land where her husband left off.
That fall, the two spent the winter in Spokane. When the snow disappeared, they returned back to the land of hard knocks. I like to imagine that she enjoyed the holiday season with him in that picturesque blooming city. This “Faldborg special” could have made some sort of a Christmas story, but there are too many connecting links and names missing.
Is there any old timer out there somewhere that can fill in the blanks? You had to have a listening ear, because the information would have had to have been transmitted from grandparents, or some pioneer. Their names, dates and whether they made a success of it all, would be exciting to find out.
There are so many things left untold in Lincoln County. If not written up soon, the authenticity will die with time. The only history bible of our local country is “The Big Bend” book. The author and his helper canvassed this whole district up to 1904, and did an excellent job. Some of the more progressive events that happened after that time really molded Lincoln County.
"Unfinished Story" Kik-Backs, page 26 (home)     (thread) 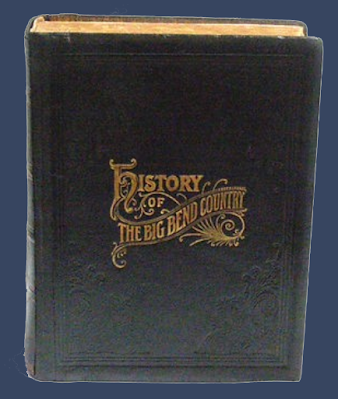 This book is free to read at Archive.org. 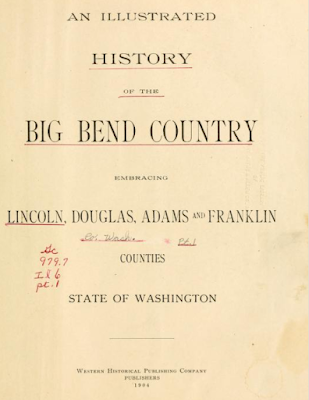