Us folks around Davenport celebrate Pioneer Day in July. It got me to thinking, what kind of frontier town was Davenport before my parents were blessed with me? Was it a righteous town or was it a "sin city"? Davenport really had a terrible time trying to keep itself in balance. Everytime a church would start up, a saloon was born. The score got up to nine churches on the righteous side, and six saloons, two breweries, and three houses of "ill repute" on the hell-raising side.

The drug, alcohol, had the same effects on its citizens in the early days as it does now; but they were more sloppy about it then because the saloons were stacked too close together.

Davenport had the 'not so hot' honor of having a hot-headed town Marshal; and sometimes he would take off his star and beat up on the worthless stiff.

Even though there were three brothels in Davenport, none seemed to have gone broke from lack of trade. One house was arranged so a customer would enter a downstairs door and, in time, would leave through the second story outside staircase. This building still stands and is a respectful residential place now. The outside staircase has been taken off because the circulating traffic has ceased to exist.

Did Davenport have its normal share of business crooks? Yes, like any frontier town. Banker C.C. May did some funny things with the depositors' money, causing him to skip the country. He threw the law off his tracks by sending word that he would come back on a certain day and make all the depositors happy again. The Davenport band waited for him at the railroad station the day Mr. May was supposed to arrive. The band didn't beat any drums or blow any welcome music because C.C. May never showed up.

Most of us are proud of our younger generation, despite the grumbling from a few. There is a small percentage of older folks that love to give their idea of good advice when they are no longer able to set a bad example.

I'll bet some of our granddads were no angels as they had the opportunity to participate in the "no-no's" and other naughty things that flourished in the Gay Nineties. It's amusing to find out that moral problems are not just 20th century hanky-panky. Some city fathers still like to straddle the fence on that issue for political reasons. 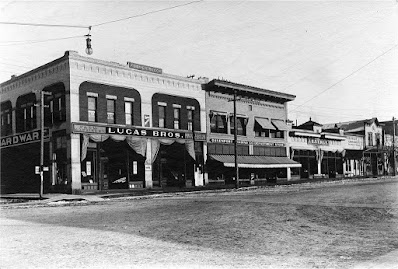 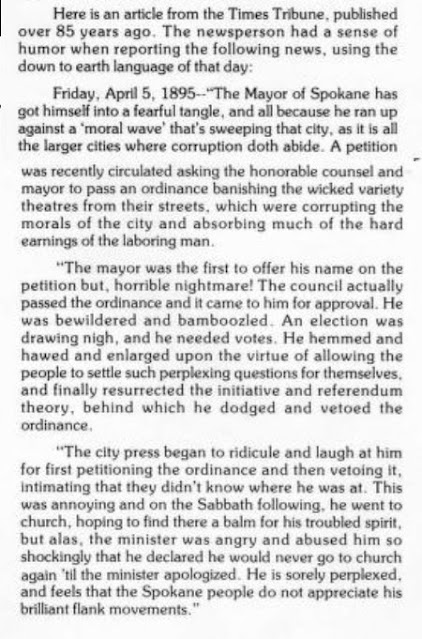 Spokane city fathers "straddling the fence"
(Second half of this article)