No Bowl of Cherries

For the last 40 years most wheat fields held bountiful crops. But our county didn't always look like a Garden of Eden. It went through an era like John Ford so vividly told in his dust bowl story [film] "Grapes of Wrath." Our historic low point in the Big Bend Country should have been called "Dust of Wrath."

Fast traveling winds that went by here 50 over years ago (1931) blew so hard that a lot Odessa's airborne soil landed at Rocklyn and layers of neighboring farms landed on the Indian Reservation. Some Indians started cussing the white man for disturbing nature's garden of flowers, grass and sagebrush.

Yes, thousands of acres qualified for Washington's "Dust Bowl." The main event took place in the Ritzville-Odessa area. It left a trail of sand-buried fences as far north as Lake Creek and east to the edge of Davenport. Foot burners were used to try and stop the drifting soil, only to find sand-filled furrows for their reward. Many a farmer got to see what the next six inches of soil looked like.

My mother's geese never knew a thing about flying but were able to use the wind successfully for a tail-end take-off that landed them safely down at the creek. Dreams of German sausage vanished when our newly purchased little piggies got lost forever in that dust storm. If St. Helens had blown its stack then, very few farmers around Odessa would have known about it. Between storms, scoop shovels were used to clean out the field filtered dust from lots of homes that had rickety doors and rattling window panes.

After the blown out crops got reseeded, there weren't enough days left, or moisture, to get yields into the double-digit figure. Yields made from Russian thistles to eight bushels an acre. It caused my Dad's renter on the Lake Creek place to go back to moonshining and it caused me to go our to Dave Stelzer's junk pile and strip a discarded combine for transplants. Such emergency methods made it possible for an ancient combine to cut a puny stand of wheat.

Except for the love of farming, those days were no bowl of cherries. Rock bottom wheat prices started the year before, adding insult to injury. The thought of getting kicked off the environmental nest like they did in "Grapes of Wrarth" was enough to make a person cry. A lot of us felt lucky that we didn't have to join the bread lines in those depressed days. 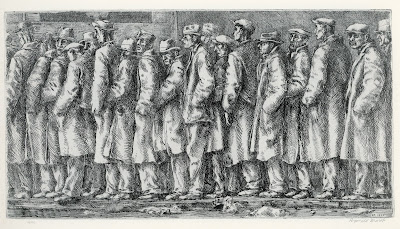 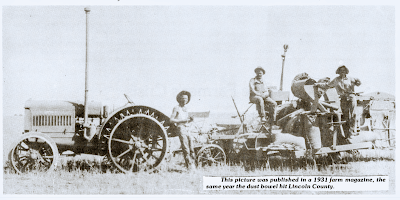 "This picture was published in a 1931 farm magazine,
the same year the dust bowl hit Lincoln County."