Not long ago on the front page of the Sunday Spokesman-Review, an article entitled, “Farmers sow money but reap debt.” With headlines like that, it could make farmers feel unhappy when they stick seed wheat in the ground, put expensive fertilizer in the soil, and spray all kinds of high power stuff over crops.

The article does hold out hope for those farmers that have their names on a deeded farm. They can have a chance of reaping dough instead of debts. Also, some of us old landlords that can’t cut the mustard anymore, ain’t necessarily reaping debts, even though our land investments may only be paying 3 or 4% in the form of rent money.

But what’s in it for the young guy with a wife, and maybe a kid or two who says, “Let me farm your land, as I’ve got the ‘hots’ to be a farmer?" Here is the computerized dope for the ‘now’ generation: “The 1984 cost of production for a 1,100 acre farm in Eastern Washington winter wheat country is $195 an acre for wheat. With a 60-bushel-per-acre yield at $3.30 a bushel, the return is $198 . . . But for the tenant farmer, subtract a third of the crop for payment to the landlord, and that leaves $132 per acre gross income.” It doesn’t take a computer read-out to tell you that there is a loss of $63 per acre.

“Arithmetic is so frighteningly simple,” so says that Sunday’s article. “Some highly efficient tenant farmers manage to show a profit. But in some cases the profit appears only on paper; in reality the farmers are losing money.”

For added cheerless news, consultant Allen Hatley of Spokane, who manages farm property, stated, “If the price of wheat falls to $2.80 a bushel, (not an unreasonable possibility given the current surplus, and Reagan administration’s goal of lowering support prices), the best decision I could make is to put the land in grass, and not even rent it.”

Some good may come by retiring our land back to grass. It would give farmers time out to go down to Ritzville and look and wait for those mountains of wheat to disappear. When the horizon at Ritzville is back to level again, it will be time to consider going back to farming again. Just don’t panic! This is the third big farm crisis that some of us have managed to live through.

We do have Tom Foley’s shoulder to cry on. He knows a lot about a lot of things. After Foley’s talk in Davenport, it was neat of him to hang around ’til the last dog was hung. A group of us had a chance to visit with him. In my hey-day it was Walt Horan that helped brace us farmers up during moments of severe crisis.

This squeeze we are going through now can help make better farm managers, and less gambling on the prospects of never ending prosperity. Until the farm crisis has passed, some farmers may have to recycle their farm machinery. That’s what old timers did when times got tough. Some of us went out to the pasture and revived old discarded drills and stripped castaway combines of their valuables. 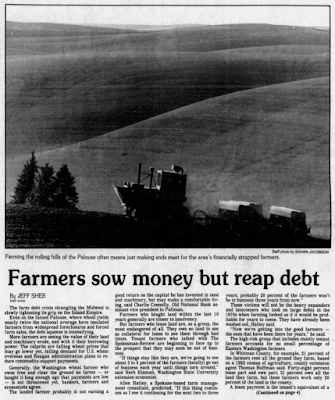 Thomas Stephen Foley (March 6, 1929 – October 18, 2013) was an American lawyer and politician who served as the 49th Speaker of the United States House of Representatives from 1989 to 1995. A member of the Democratic Party, Foley represented Washington's fifth district for thirty years (1965–1995). He was the first Speaker of the House since 1862 to be defeated in a re-election campaign. (Wikipedia)