Where I Spent My First 4th of July

On the road to Fort Spokane, Porcupine Bay, and all points north, the road goes right by a tule laden swamp. It's located just south of the old North Star Grange Hall. Can you imagine that 76 years ago this Independence Day, 1986 that nearly 2000 early settlers gathered around this watering hole?


Many times on our summer outings, I would point out to Sugar and friends that this frog pond was where I spent my first 4th of July celebration. Since I hadn't reached my first birthday, naturally I didn't remember a darn thing that day. I suppose I was more interested in my mother's milk supply and getting dirt wiped out of my eyes. It was a long, dusty buggy ride that my folks took me on.


My dad didn't realize what an advanced era that we lived in at that time 'til he attended that Egypt celebration. He told me how the Jeffries-Johnson championship fight was reported within minutes from Reno, Nevada.


How was it possible in those pioneer days when the words "radio" and "TV" didn't ring a bell? Well, it was telegraphed from Reno to the Davenport depot. From there the railroad agent would report each fighting round over two telephone lines that were nailed in different locations on trees. Two receiver listeners would then shout out the results. It could have been the first outdoor stereo sound system. Truly, it was a big deal for those days.


I have written a report on what happened that day, July 4th , 1910, as seen through the eyes of a 'Lincoln County Times reporter':

"Last Monday was an ideal Fourth of July; all that the small boy, the big boy with his best girl, or the parents could wish. It was warm enough for the lemonade and pop vendors to do a thriving business and for all concerned to seek the friendly shade.
"Hundreds attended the Egypt celebration in the pine forest on the banks of Inkster's Lake about twelve miles north of Davenport. Shortly after six o'clock in the morning the teams began wending their way toward the pleasure grounds. They were loaded with happy people and each supplied with a bounteous picnic dinner.
"The writer in company with County Surveyor Reed and Sheriff Level left Davenport just before ten o'clock, by auto. It was a beautiful ride, albeit the dust was very dusty and very deep.
"Arriving on the grounds we found an ideal spot for such a celebration. There was a goodly crowd already there and they kept coming from East, West, North and South until there was from 1,500 to 2,000 jolly, hot and dusty people on their grounds.
"The Egypt coronet band and mixed chorus furnished instrumental and vocal music for the occasion and all did well, as the hearty hand-clapping at each rendition attested.
"The two orators of the occasion, James Freece and Fritz Baske, two of Davenport's young attorneys, were star attractions. We were truly proud of them. These young men handled the almost threadbare subject in new and novel lines and held the closest attention of all who could possibly get within reach of their voices. The song by the little girls of Egypt, "The Red, White an Blue," was splendidly rendered and highly cheered.
"We were introduced to many of the old settlers of Egypt and vicinity and especially from J.S. Frans, the first settler did we learn the trials, tribulations, privations, and final triumphs of those hardy pioneers who blazed the way to this garden spot of Eastern Washington.
"The grounds are owned by J.J. Inkster of Davenport, former sheriff. His father, St. Clair Inkster, who, although nearly 79 years of age, was on the grounds all day, the jolliest and spryest old Scotchman to be found in the Inland Empire. Another of the happy crowd whom we were pleased to meet was Simon Reinbold, one of the early and now highly prosperous citizens of that section.
"As the noon hour arrived, we couldn't resist the pressing invitation of Mrs. W.B. Brockman and her husband to take dinner with their interesting family. They had their ample store of good things spread out so close to that of Jack and Charley Moore and families that we may have 'got over the line' occasionally which was wholly unnecessary, for everything set before us by Mrs. Brockman, from the fried spring chicken to the cherry pie, was tempting and in abundance.
"The ball game between Egypt and Larene was witnessed by an enthusiastic crowd of fans. The Larene team come off victors....The tug of war between the Egypt and Davenport teams was closely contested and fairly won by the 'Egypt heavies'.
"There were a number of foot races and other sports indulged in. Talk about the wild and woolly west and the inconveniences of this remote section, way away out there in this pine forest twelve miles from town, a telephone instrument was nailed to a tree and the great Jeffries-Johnson fight was reported to us round after round. Even over on the ball grounds, a phone reported the fight just the same.
"Never have we been allowed to mingle in a more orderly and good-natured crowd. During the entire day and evening not a cross word was spoken and everybody went home happy and grateful to all who had instigated and carried forward to a successful termination this model celebration." 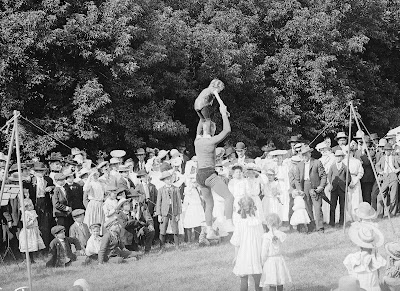 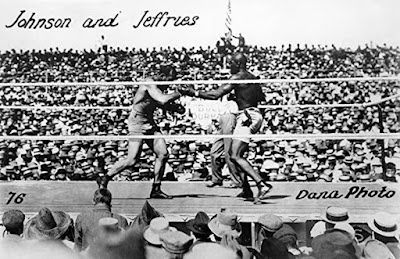 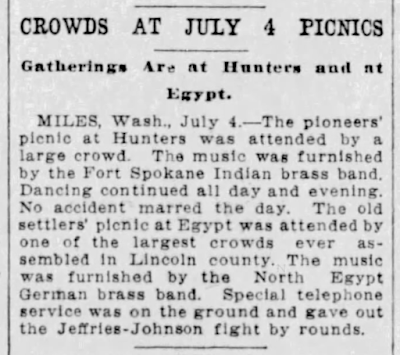 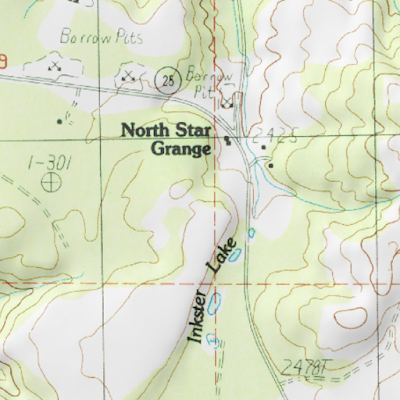 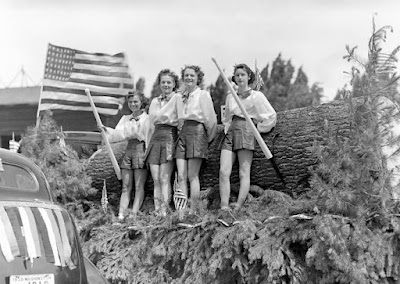