A Flood of Memories

Did you ever find something that you hadn't seen in ages, and it brought back a flood of memories? This happened to me one day when I went snooping in our old junk pile out in the pasture.

My eyes fell upon a T-shaped gizmo, half buried in the sod. It was made of blacksmith iron and had a large square hole in the middle. A late pasture flower grew its way through the center of this thing, and was waving pretty-like in the wind. This rust colored pump holder was made for me 45 years ago by Leslie Slater, who farmed north of my place.

While digging this contraption, with a discarded dipper handle, my thoughts went back a long time ago when I had a lovely crop of wheat that was just standing there waiting to be beheaded.

It was a hot day. To the west, a storm was brewing. To my left, my combine was holding a motor that refused to run because it didn't like this hot environment. Next to the motor was an aging radiator that refused to keep its cool because its arteries were half plugged up. On my right was a sack sewer laying in a straw pile, rolling a homemade cigarette after I had told him to not smoke his darn weeds in the field. It was enough to drive a guy up a tree.

I just had to get my mortgage ridden crop to the warehouse so the bank could get their hands on it. What to do? That took some calculating. The radiator was already classified as a relic, so I didn't dare get blown out, as it would have hemorrhaged for sure. I found a water pump of unknown breed in the bottom of the chaff-filled tool box, and I thought of Leslie, the problem solver. With a feeling of desperation, I confronted Mr. Slater. That same evening, Leslie gave my combine motor a water pump implant.

Years later, Leslie seemed to thrive on solving mechanical problems, and soon spoiled his neighbors and friends by sacrificing his own work at times. He purchased the first experimental self-propelled combine that was put together by a harvester manufacturer. The company used a large wheel tractor and turned the thing around backwards so the drive wheels could be in front, where the factory guys hung a header. All the treshing stuff was stacked where they found room. A tower-like structure, on the side, held a bulk tank.

It was a mess, and certainly out of place, on Slater's scary hills. Les went to work with his wrenches and hammer to get the thing molded to suit his taste, making it possible for the grain to find its way to the bulk tank.

Another historical fact: During World War II, Leslie and I were two of the first to start a trend of dressing up the rather dreary harvest scene by adding young women. Sylvia took the responsibility of getting her dad's wheat to the elevator; and my sister-in-law, Edwina, was trucking for me while Sugar was busy raising chickens, instead of kids.

Years later, I got to know another side of Leslie after he developed a punk heart. At a warehouse annual meeting, we were seated together in front of plates filled with the usual string beans, mashed potatoes, and ham. He seemed so grateful to be still among the living and developed a good philosophy about life.

He believed anyone recovering from a heart attack should learn to keep his cool. I agreed with him that temper didn't have any creative value except to make a fool out of yourself. Leslie then reached for a program sheet and scribbled this statement, " Make a speech when you are angry, and you will make the best speech you will ever live to regret."

His restricted activities brought out a hidden gift he had in the form of art. He was painting special scenes for the Lutheran and Methodist churches. As the program was ending that night, I couldn't help think, as Leslie was doodling on that piece of paper, that those same work-worn fingers could now paint a delicate flower.

It's been a decade now since Leslie cashed in. Unfortunately, his beat-up heart didn't give him the added time to fulfill some of the retirement years that we all hope to enjoy. 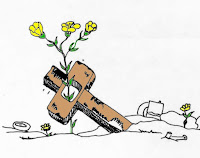