A Drag and a Mistake

In 1932, due to hard times, I decided to retire my under-powered wheel tractor and the Deering combine during that harvest season. Orlin Maurer and I consolidated our harvest operation that year as a form of survival.
After burning the midnight oil, an agreement was reached that Orlin would cut my crop for one buck an acre. That is, if I furnished hay-type fuel for his horses. In return, I took an oath to pick up all his wheat for a flat rate of one-cent a sack, if he would keep the gas tank full. My truck held 30 sacks. For every load I delivered to Rocklyn, I was credited with 30 cents worth of non-inflated currency.
It sounded great, but it was a drag and a mistake. I wasn't designed to lift a whole crop of wheat off the ground. Those sacks weighed the same as I did.
Being a health nut, already in those days, I had one heck of a problem to survive while working away from my independent farm. My idol, Bernarr Macfadden, was a big-shot physical culturist in those days, but he wasn't very popular with the meat-and-potato farmers.
"You got to eat meat or you won't have the strength to load those wheat sacks," my cousin Orlin would tell me with some authority. True, with a peanut butter and fruit diet, I was just barely able to get 10 loads a day to the warehouse, enough to keep up with the combine. I still believe, with a steak laying in my stomach, I would have fallen behind by a load or two.
Going semi-nude was no fun either when it came to loading sacked wheat. Legs got scratched up with stubble. Gunny sacks worked like sandpaper on exposed wrists and knees when used to pry those awkward sacks up and onto the truck bed. It didn't take long to learn to slip into a pair of pants and shirt, then sweat it out 'til the truck got loaded.
"Harvest Was In The Bag" Kik-Backs page 80, part 2 (continued)     (home)     (previous) 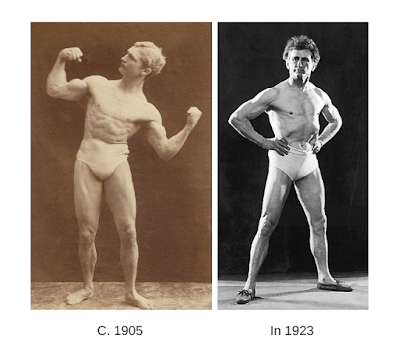