Clean as a Hound's Tooth

After studying Judge Nevins' picture over at the Mielkes the other night, I was reminded that right after I married Sugar, my monetary assets fell to a new low. It caused us to drive out to the east end of Spokane, where I could purchase a new axe handle for 40 cents. After paying an old crook for a handle that later warped into a bow, Sugar spotted a stately, board-like figure walking up the street, dressed in bird-legged striped pants. She asked me, "Could that be Judge Nevins?" "Yah," said I, "What's he doing in this seamy part of town? Could it be that he's looking for a house of ill repute?" That caused us to case the judge.

I knew he always carried a stiff neck, and it would give us time to duck if he tried to wheel around to see who was following him. After walking a couple of blocks, the judge turned sharply into a narrow, small building that had four stools and a bar, where huge milkshakes were sold for 10 cents.

He must have liked his dessert first, because when he got through sucking his shake through a straw, he immediately walked out of the place and turned into a coney island joint a couple of doors down the street. His two coneys came to 15 cents, plus one token, making him able to dine on the town for 25 cents and two-thirds cents.

After patting his face with a couple of napkins, the judge rose from his rather high perch, walked out and turned himself back to the business district of Spokane with his moral character still as clean as a hound's tooth. 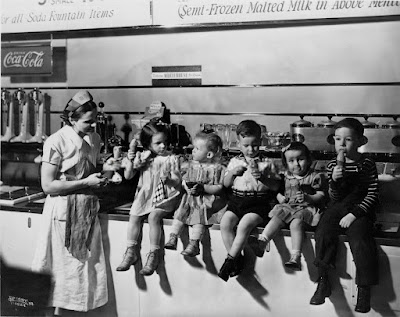 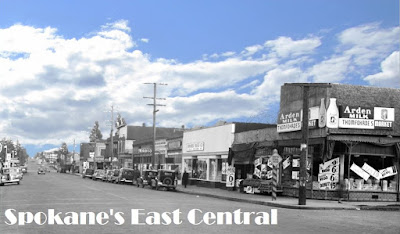 "...the east end of Spokane..."
HistoricSpokane.org