Losing His Farm to Gold Mine Swindlers

There is much less reason for being conned out of money today than when our dear departed loved ones were trying to make a living. Yet, idle savings can still get washed away. Who thought that Washington Public Power Supply System would fall flat on its face? Well it did, and many lost some dough. But WPPSS was not a swindle. It was something like gambling at Las Vegas.

The story about Herman Bursch losing his farm to gold mine swindlers opened up a whole can of worms. Stories from every direction came in about broken dreams caused by money being transferred from pioneer farmers to empty gold mine holes.

I even received information on that religious cult Peterson who promised power from God instead of high-octane to run his faith-operated airplanes. I was told where I can locate some of the stock certificates that this false prophet sold to gung-ho believers.

Last spring, the Mielkes rifled through an old family trunk. Their findings were like an empty gold mine filled with old worthless mining stock certificates. However, through long years of aging in the trunk, the certificates did grow to some value as souvenirs. The trunk also revealed that their dad’s financial loss was more devastating than realized. If it hadn’t been for a caring relative who stayed out of those ‘gold rush’ days, the Mielke foundation would have collapsed.

I also found out from Chester Bursch how the swindlers used a front to squeeze more money out of the involved stock holders. Broken down machinery was dumped by the hole in the mountain and a bunch of unemployed men were herded up to the site. The scene was just right when the worried backers arrived. A spokesman for the swindlers made a statement in these relative terms, “All we need is a little more money to fix up this ready-to-go machinery and to get these professional miners you see standing here, back to work. Nuggets can then be hauled out and turned into cash.”

Herb Kruger remembers as a young fellow that he went up to one of the mines with a local group of financial backers. To stimulate more interest in the sales of stock, hand shovels were used to square up a vertical surface on the side of the mountain. When a roof like mining entrance was put up, the promoters went back home. From the road below, it looked like a real mine entrance that extended back into the bowels of the mountain.

Even oil swindlers got into the act. This summer I received a copy of an original oil promotion letter. It was sent through the mail on Dec. 26, 1907 as sort of a Christmas present. The idea was to catch all the suckers that lived throughout the Inland Empire, and to drain them of their cash. The letter reads as follows:

Dear Sir: Herewith we hand you a deed to a lot in the town of Waukesha, Wash., and take this opportunity of calling your attention to important developments about to take place there . . . Aside from establishing a health resort at Waukesha the promoters expect to develop power for commercial purposes at Lake Creek Falls. This in itself will make Waukesha an important point.

We have also indications of petroleum, which led to the recent incorporation of the Waukesha Oil Company, capitalized at $1,000,000 . . . The company has already purchased a complete oil drilling outfit. This drill will be operated night and day by expert men from the oil fields of Pennsylvania.

The Waukesha Oil Co., will give you a lot and 40 shares of stock in the Company for $10., 10 lots and 400 shares for $100. When the Company strikes oil or gas the person securing 5 or 10 lots will own sufficient ground to have a flowing well worth $5,000 to $20,000, besides shares in the Company. Do you want to share in this enterprise? Oil has made many millionaires, among them the richest man in the world, John D. Rockefeller.

[Note: Although Waukesha was obviously a bust, I have not found any evidence that it was an intentional swindle. - P.K.] 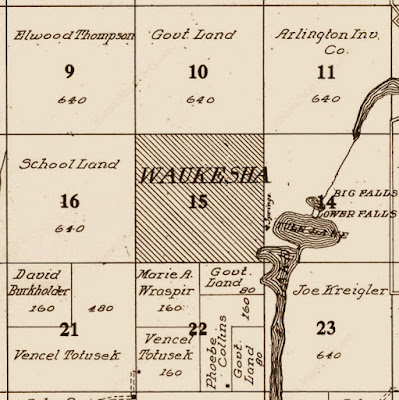 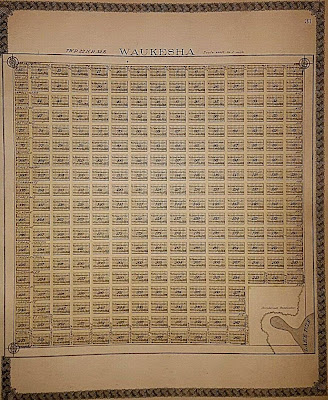 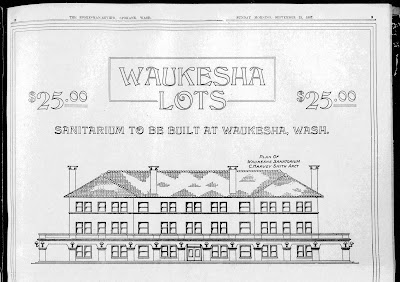 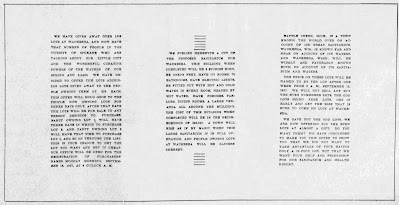 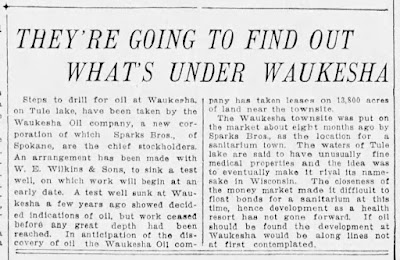 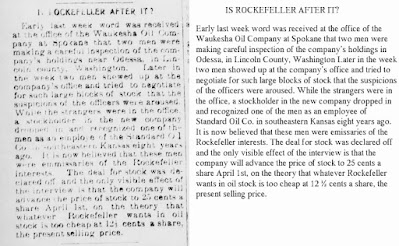 The Ellensburg Dawn 24 Mar 1908
(This story appears to be a scam perpetuated entirely by shills in order to boost the stock price!) 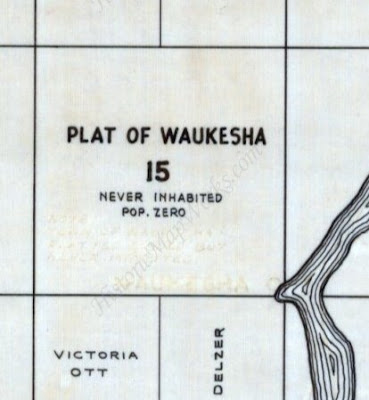 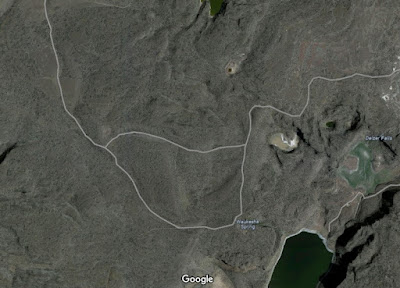 The description of the geology appears, to me, to be entirely made up, although I have read there may be oil under the basalt in eastern Washington, the basalt is actually ______[researching] feet deep.