Before She Graduates to the Rocking Chair

A quick example from a handful of retirees on how they are surviving retirement:

One is our own nonagenarian, Grandpa Deppner. He leveled a cement slab and made a short brick walkway out the back door, so he won’t fall down and go boom during icy winters. One of his projects was to find out how deep morning glory roots go down in the ground. His garden spot began looking a little like a mini World War One trench. That informative project kept grandpa busy for about a month. Lately, when he ain’t busy figuring this heaven and hell stuff out, he is building an additional room made out of discarded railroad ties.

A lot of sister Ethel’s retirement time is spent driving her car to many places while performing lots of errands. If her drivers licenses stays good, I’m sure she will use up a couple more cars before she graduates to the rocking chair. In her spare time she busies herself by entertaining, and helping her children’s children.

In Davenport, Elaine Maskentine, although a junior in the retirement field, states that, “I enjoy retirement.” Having finished a successful teaching career, she is busy doing casual things in a more enjoyable way than ever before. Since Elaine grew up with lots of musical ability in her system, she enjoys making sounds of music and singing. It works wonders in helping her glide through those "no responsibility years" of retirement.

What makes some retired people happy? Here is another contrast example:

Years ago in Davenport, old man Shelton successfully spent his retirement years in a blaze of satisfaction. He had an eccentric and monotonous way of enjoying himself. His daily chore was to lug a wheelbarrow full of discarded cardboard boxes from downtown grocery stores. The Shelton trail wound across vacant lots and ended just beyond the Methodist church, where he crammed his house and shed to the rafters with boxes. Shelton’s span of live also allowed him time to create a fortress of boxes around the perimeter of his home. However, his heirs collected no benefit, as the boxes decreased in value to where his property wasn’t worth the levied taxes.

How to keep from turning into a Shelton? It’s best to follow more than one rut in life. Traveling to an exotic place seems to work best for a certain percentage of those that are staring retirement in the face. I hope my substitute anecdote of taking short outings with Sugar will work.

For safety sake, we should have taken a real pre-retirement trip or two. That’s what the senior Mielke’s of Rocklyn did. (Carl and Dorothy) After finding that all their kids had grown up, they thought it was time to give a trip to Europe a try. It turned out to be such a success for them that they tried it again. This time they wrapped up Russia in their tour and revisited more extensively with their European relatives.

Now for a look at a busy stay at home:

Merlin Shook is enjoying retirement in our fair city. His days of filling shelves and stuffing groceries into shopping bags at Safeway came to an end in 1984. — What is Merlin doing? Well, his workshop may be smaller than Santa’s, but he is just as busy as that old white bearded guy. The Shook’s home and workshop holds displays of his creative woodcrafts. Another of Merlin’s retirement projects is the landscaping of the Fair Grounds, where the bright flowers and shrubbery are enjoyed by fair-goers.

Laurence Jayne is another retiree who puts his past skills to work, by improving the Lincoln County Museum at every opportunity. Designing of the fire bell tower and working on the project ‘til finished was his accomplishment. Something that will be enjoyed by the city. It’s how you spend your retirement years that count.

[this is the last article in Walt's last book.] 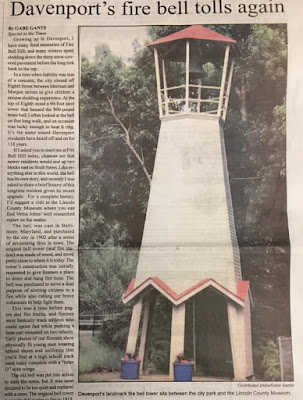