The Red Complected Auctioneer...Commenced His Chatter.

While we’re still on the subject of auction sales, one might as well milk it dry. These modern farm auctions make buying horse-power simple. The auctioneer just stands on a tractor, and begs for a decent price. Soon a new owner of the large iron horse, has all the instant power he needs.

In early day auctions, you just bought one horsepower at a time. Mostly to replace that dead, or stoved-up animal.

A typical farm sale went like this: When it came time to sell the work horses, Sandy Keith, the well-known auctioneer would holler, “Stand back folks, give this horse plenty of room. She will calm down when you get her hitched up to that heavy load this spring.” “Oops, watch out,” Sandy would warn everyone as the rear end of the horse was getting pretty close to a spectator. “When you get her hitched up, just set that plow in a couple of notches deeper for the first round or two, and this mare will settle down.” “Whoa there,” could be heard loudly from Sandy’s mouth, as the female horse again fussed up. This time, she braced her two back legs, and stretched her long neck so high in the air that the handler had to stand on his toes to hold her.

Sandy paused for a bit, and wiped his nose with his leather glove, then pointed to the owner. “Henry, didn’t you tell me that you could pet this mare, and she would eat oats right out of your hand?” “Yup,” came the answer. “See there folks, she is just a little nervous today,” Sandy commented, and again requested the crowd to stand back a little farther, as he pointed his auction cane around in a circle.

The red complected* auctioneer climbed up on the stool he always carried with him, and commenced his chatter. “Now, how much am I offered for this fine mare? Come on now, her teeth are in excellent shape. She is just a filly.” On and on he would go ’til someone fell heir to that nervous horse.

When cow time rolled around, Sandy would busy himself with the owner on the history of the old family cow. “Folks,” Sandy would start off, “Here is old Bossy Cow herself. She will come fresh in April, just in time for making all that country butter.” That information was necessary, as it was hard to tell for sure whether old Bossy was pregnant or just full of hay. Sandy failed to explain why butter was more important in April than in March. It would be of interest to know how the family cow got its nick-name Bossy.

Those old sale days are gone, but it’s kind of interesting to think back once in a while. 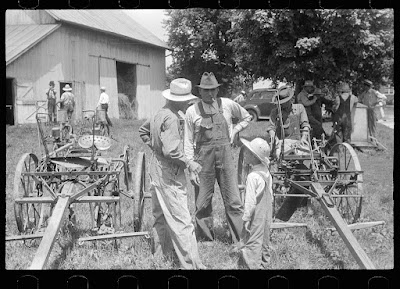 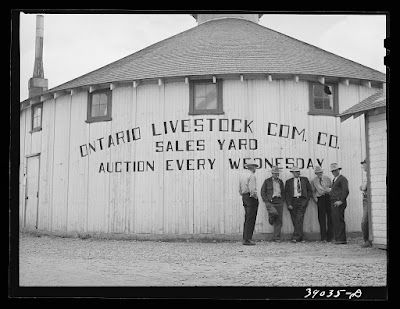 "While the sale goes inside, a few men talk outside the auction barn." Ontario, Oregon
Russell Lee 1903-1986, photographer
1941 May / Library of Congress 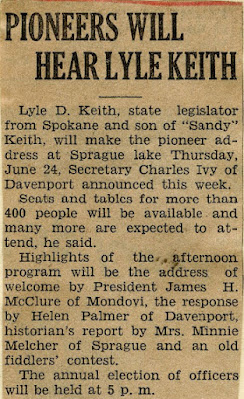 *Complected, a back formation from complexion, is an Americanism dating from the early 19th century. Although it has been criticized by some as a dialectal or nonstandard substitution for complexioned, it occurs in the speech of educated persons and occasionally in edited writing. -Dictionary.com