Loves Best of All: His Simple Life on Earth

I inherited a father-in-law who is 91 years old. Not really a big deal, except that he is not staggering around in some nursing home. So far, nature has graced this old guy by letting his aging process meander along at a slow speed. He works every day, except in winter when there is a blizzard, then he just feeds his cows.

Great-grandfather, Ed Deppner, has never had a physical examination in his whole life, except in 1918 when World War One army guys wanted to know if Ed was physically fit enough to be shot at. However, he did lose a mouthful of teeth, but is going very well on what stray teeth he has left.

Mr. Deppner has made his living the hard way, by earning small profits from a scab rock stock ranch. His implements were simple and his laboring hours required lots of back breaking work. He lives a humble life and is an honest man. His conscience won’t allow him the privilege to become even just a little bit greedy. Ed never showers himself with luxuries, but gift checks flow easily from his hands to relatives when it comes Christmas and birthday times.

Since his wife is laying up in the Rocklyn cemetery, Sugar and Edwina Mielke spread out a weekly dinner in his bachelor type kitchen. The rest of the time Ed eats only what his slim body needs.

Years ago this poor immigrant from Poland took in Sugar and married her mother, then successfully raised three more kids. Ed has been putting up hay years before he plunged into matrimony, and is still at it to this day. His hay patches now consist of Rocklyn proper and along the railroad tracks that extend out to his old ranch.

Truly, Ed Deppner is a tough old bird. It’s the physical activities that keep this 91 year old guy going. He knows it, and that’s why he keeps right on mowing hay, and stuffing it down his cows in measured doses.

The haying season weather this year was a scorcher for Ed. Under his tight work clothes beats an old seasoned heart that is busy pushing blood around in search of some cool body spots. A sip from a plastic jug of water that sets on the hot gear box of Ed’s haying tractor seems to take care of his evaporation needs.

Years of usage has hardened Great-grandfather’s bones to where he can take the jolts that his tractor dishes out when it bounces over the badger holes and other bone crunching obstacles. Usually, old Ed uses a third of his daily stored up energy trying to start his hand cranked vintage tractor. If his day is a lucky one, he and his tractor can make lots of grass and alfalfa hay. When mechanical failure takes over, Ed usually sings one of his favorite tunes. Lately he has become quite hoarse. In spite of all the hot weather and a balky tractor, Ed’s hay patches finally got mowed down. But that brings up another problem that Great-grandfather has to face. His hay truck is also a vintage variety. The two front fenders on the truck have been caved in from years of working on the motor. Ed did manage to nurse the truck with its first load of hay to within 18 feet of the small stack that he had started with the aid of a wheelbarrow and a pitchfork.

I have just made a number of trips over to my father-in-law’s place and I still can’t find out why he can’t get the truck any closer to the stack than 18 feet. It’s embarrassing! I thought I knew how to make any motor come to life. Finally, George Mielke came to the rescue with a spare truck.

However, Ed is a pleasant guy to work with when you have plenty of time. Having a sharp mind, he tells in detail past events and all the troubles he experienced throughout his long life as a haymaker. Ed doesn’t bark out a lot of naughty words when things go wrong. His habit to sing little ditties wards off any man-made stress.

Father-in-law stays happy throughout the week. He is a very sincere man, but when Sunday comes, he worries too much about religion. You have to be a pretty sharp preacher to outsmart him on answers to his questions that are impossible to answer. But if you are a deep down fundamentalist, I guess you have that right when you live in a world of the supernatural.

Still, Ed loves best of all: his simple life on earth, until his dying day will take him away. Even with his doctrinal thinking, the safety of the great beyond is just his last resort. 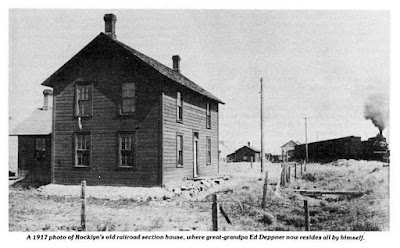 A 1917 photo of Rocklyn’s old railroad section house, where great-grandpa Ed Deppner now resides all by himself. 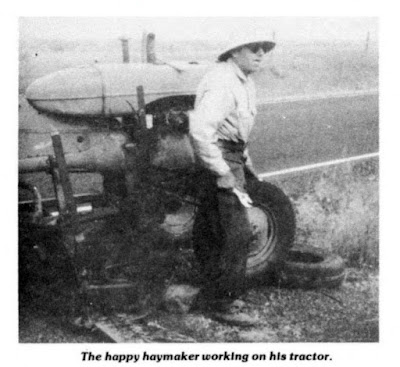