Kind of an Earth Wedding

In less than a week, some Rocklynites had the privilege of attending two different kinds of weddings. The first one was a formal affair. The Gooley-Mielke shindig filled a large local church to the brim. It was followed by a formal wedding reception at the brides parents’ farm. Live music and food was plentiful. Happy congratulations and fellowship lasted ’til there was no one left. I’m sure the newlyweds were well satisfied with that kind of send-off.

Now from the other side of the fence: Four days later, on a high mountain top north of Davenport, a different kind of wedding took place. The outdoor attendance was only about 50. However, there were guests from Edwall, Wilbur, Reardan, Davenport, Spokane and Seattle. Also a plane brought in a sister and a mother of the bride from Chicago. The rest were local natives, including three dogs and a horse.

Getting there was no easy chore. It was not like the average weddings, where you are escorted down a soft carpeted aisle to a pew. In contrast, there was this mountain that rose from a humble valley. It was your problem how to get up to the top to witness this wedding ceremony.

Half way up this precipitously steep mountain, I decided to look down. I froze when I realized there was nothing to stop us if slipping took place. That hard rock bottom looked mighty fatal.

On becoming helpless, Sugar left me and accepted aid from a young native. Hugh Williams had to come down from the top with his mountain goat type of shoes to rescue me.

Some of the valley dwellers found an easier pass up to the top. A home movie camera with sound equipment was lugged up. Also a tape recorder, cameras by the handfuls, and preacher Barr’s ceremonial gown.

Bouquets of home grown white gladiola got up there somehow, and were artfully arranged among the rocks. The necks of the adult guest were hung with red rose hip beads that were made by the bride and groom.

With no aisle to walk down, the bride, Terri Koenig and groom Rico Reed stood precariously overlooking all that deep and beautiful scenery. It was kind of an ‘earth wedding’ that included everything close to nature. During the wedding, little children were busy blowing pretty soap bubbles that floated past the bridal party and down over that scary below. Rev. Roger Barr so ably performed the wedding ceremony, emphasizing the spirit and beauty of life. It was a refreshing service put on by sincere people. 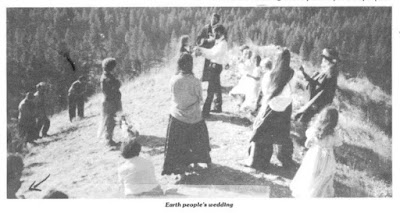