Poked Fun at a Lot of Us Folks

Being an editor or a writer for a newspaper in a country town is a challenging and sometimes rewarding opportunity. Weekly newspapers have given many a talented person the experience needed for higher goals or to become a local fixture. However, a person can’t help but feel compassion for new editors. It’s "not all gold that glitters" when it comes to pleasing everyone, when a stand is taken on controversial issues. But there’s that satisfying feeling that comes all over you when you write something that you feel good about. True, weekly news has to be written up whether it’s a scoop or not.

Of all the editors I got to know, I think the most unique guy was George 'Scoop' Hering. He was Davenport Times editor from the late 1920s and on through a good chunk of the 1940s.

Contrary to the ambitious editors of today, Scoop Hering didn’t want to go on to higher picking. When he came down from chilly Alaska, a warmer small town looked good to him, so he stayed around in our county seat for the rest of his life. He was a likeable guy and always carried a smile, but not quite the Will Rogers type.

However, he did have a sense of humor and had a column called ‘Fish Tales’ where he made comments, and poked fun at a lot of us folks.

Old Scoop thought I had odd ball habits because I exposed a lot of skin when comfortable weather set in. I was made the target for a lot of his ‘nature boy’ jokes. For an editor, Scoop’s life style was also quite different from the status quo. He never owned or drove a car and depended on his feet and catching rides for news gathering. I doubt whether he would have lasted very long now days without a press car. My brother-in-law hauled Scoop to every important sport event in the state. He lived and ate sports with such force that Davenport’s football field is named after him.

Hering was a very fast typist, but I found out lately that he never learned to change the typewriter ribbon. Either the publisher or an alert office girl did that chore for him. Scoop also had it easier than our present day editors. During the depression, the paper felt the squeeze of hard times, so lots of weeks the press only printed four pages.

It must have been on a Sunday when old Scoop Hering passed away years ago. Sugar and I were out walking in our Sunday clothes. Upon approaching his home, we saw the undertaker rolling Scoop out for his last ride down town. 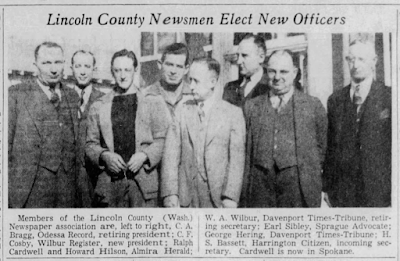 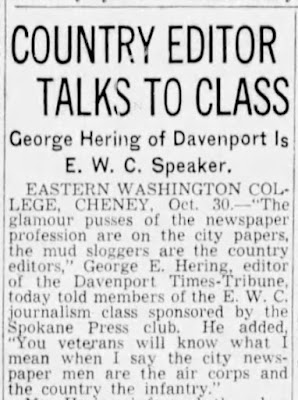