[This page was not written by Walt.]

The Columbia Basin's Big Bend country includes all of Douglas and Grant counties and most of Lincoln, Adams, and Franklin counties of eastern Washington, an area of more than 9,000 square miles. It derives its name from "the Big Bend" of the Columbia River, which bounds the area on the northwest, west, and southwest. The Big Bend is further bordered by the Spokane River watershed to the northeast, by the Palouse River system on the east, and by the lower Snake River drainage to the southeast. The average elevation of this region is approximately l,100 feet above sea level.

Plateaus, broad basins, and low foothills predominate in the Big Bend. Although its general features are chose of a tableland sloping gently southwest, there is much diversity in its surface details, largely caused by the effects of ancient glacial outwashing on the structurally variable basalt.

The eastern two-fifths of the Big Bend- the eastern uplands-consist of rolling hills sloping generally to the west. The plateaus along the western border of the Big Bend, on the other hand, stand at several levels and are interrupted by the Frenchman Hills and the Saddle Mountains. The northern edge of the Big Bend includes the southern fringe of a hilly mass of highlands intersected by north-south floodwater drainage ways cut through structural divides. The westernmost segment of these highlands consists of the Waterville Plateau and the Beezley Hills. Much of the northern portion of the Big Bend is composed of outwash material from the Lower Grand Coulee, known as the Coulee fan. A small enclosed plain, the Quincy Basin, extends south 20 to 30 miles from the Beezley Hills to the Frenchman Hills.

To the south of the Lower Crab Creek drainage rise the Saddle Mountains,similar to the Frenchman Hills in character. This ridge's southern incline, called the Wahluke Slope ("soaring up like birds"), slants to the Columbia River, which flows easterly in the lower portion of the Columbia Basin. The Wanapum Indian term for this slope was Wanuke ("going on foot up hill"). At the eastern end of the Saddle Mountains, a ridge curves to the south, declining in elevation to form a somewhat irregular bench sloping to the Columbia and Snake rivers. The principal drainage through this latter area is Esquatzel Coulee, which fans out over a gravel outwash north of Pasco and on down to the Columbia at its confluence with the Snake.

The Columbia Basin Project, located within the Big Bend country, is a multiple purpose Bureau of Reclamation development providing irrigation, power generation, flood control, navigation, recreation, and fish and wildlife benefits. The major feature of the project is Grand Coulee Dam, situated at the head of the Upper Grand Coulee on the Columbia (river mile 596.6, about 95 miles west of Spokane). Located in Grant, Adams, and Franklin counties, the entire project area, including the East High locality, contains about 2,400,000 acres, of which 1,097,000 acres are considered irrigable. To date, about 560,000 acres have received water. It is unlikely, however, that this will be greatly increased in the foreseeable future. If ultimately completed, the water distribution system will have about 600 miles of major canals, 4,200 miles of laterals, and 3,600 miles of wasteways and drains. 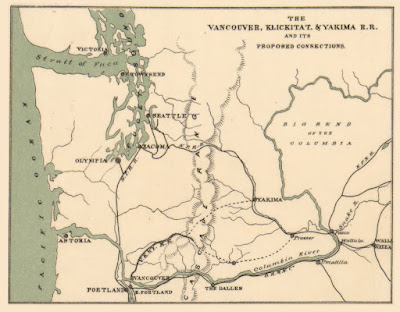 "Big Bend of the Columbia" / Detail from1888 Clark County Map 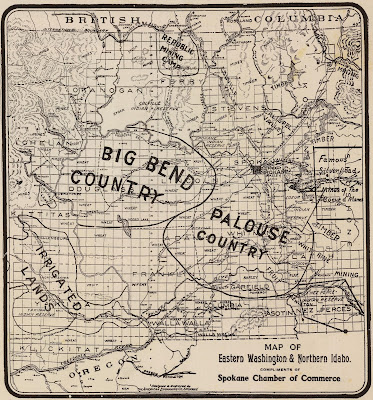 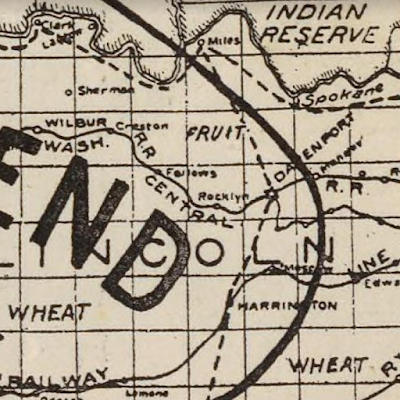 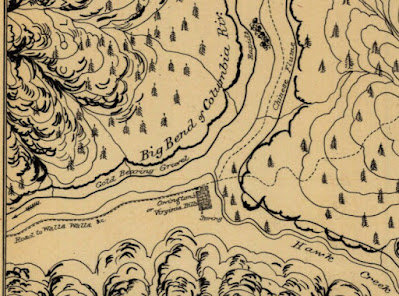 Hawk Creek 1882 - Fort Spokane Map
(Not the big bend from which "Big Bend Country" is named.) 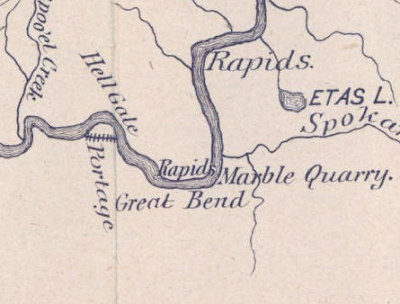