Once again Christmas time is here. It’s interesting to go over our past childhood Christmases. Every event was brand new to us then. We have a lot to be thankful for, as most of us will soon complete another year. We Christmas children of the past are now playing the roles of parents, grandparents, or the childless ones[*]. It’s how we found ourselves cast in life.

We now have a much better Santa Claus than when I was a kid. What glimpses I’ve seen of him lately, I notice that he has slimmed down considerably, and can fit into his sled much better, leaving more room for toys. After all, he had seventy-one years to improve on himself since I first heard of him. All during my Santa Claus years, I really never saw him in person. My mother was the only family member that ever met him. He gave her a post card picture of himself. Except for being heavier, he doesn’t look any older than he did then.

Thinking back to those early day wild sleigh rides that Santa took through our territory brought back some disappointing memories of that old guy. Sure, he usually did leave lots of toys, but at times he was a discriminating old geezer. He favored those that had everything, and then turned tightwad with little ones that barely had any toys at all.

I’ve forgotten the year, but it must have been 1913 or 1914, when Santa left one ornery brat sacks of toys. This kid already had toys stacked in nearly every corner of the house that his parents dumped on him throughout the year. That same Christmas eve, after leaving the Rocklyn district, old Santa went sailing right by a new settler’s home that held two kids and a baby. That’s right, he never left a darn thing! All those two walkable sisters had to play with was some empty sewing spools, and a couple of rag dolls with their stuffings hanging out. 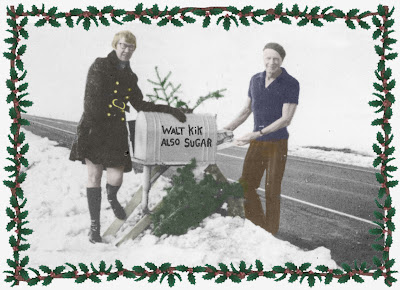