It Would Give Off a Pleasing Purr

Since I’m retired and getting along in years, I have a shocking feeling I may be turning into an old eccentric, but I can’t help it. Especially when I think back to those older model tractors. They really had a personality, and were part of you.

Those two-and-four cylinder motors turned over at a slow enough speed that they actually talked to you. On a cold morning, they would cough a few times to let you know they were clearing their throats, and getting ready for a hard day’s work. Upon approaching a hard pull, sounds could almost be counted and felt. Once over the hill, it would give off a pleasing purr for you, in a relaxing feeling of accomplishment.

In contrast, most of these modern tractors have motors that have a battery of cylinders sticking out all over the motor block on both sides, and the crankshaft turning over at speeds of a hydroplane. They emit only sounds of excitement that don’t communicate with you. Yet, when these rigs don’t bust to pieces, they can screech along, pulling their heavy load in a very busy way.

Several tractors in my neighborhood, with their high-speed motors, develop symptoms of internal belly aches, without letting the operator know a thing about it. Soon the owners have the motor’s intestines laying all over the shop’s operating table, trying to repair the damage and restore life.

Things started getting out of hand when I bought my last low RPM, two-cylinder tractor. It came out with an electric starter just to start a ridiculously designed four-cylinder starting motor, that finally, by an array of levers, started my two-cylinder tractor. My repair book showed that this starting setup had over three times the parts than the main power plant had.

All this is a far cry from a trip Sugar and I took into Canada awhile back, when we ran across an old English-built, four-plow, one-cylinder, diesel tractor. How did they start this rig? Very simple; you just casually turned the outside flywheel over to a certain marking, then you opened up a small chamber and placed a shot-gun shell (minus the pellets) into it, closed the lid, and hit it with a hammer. 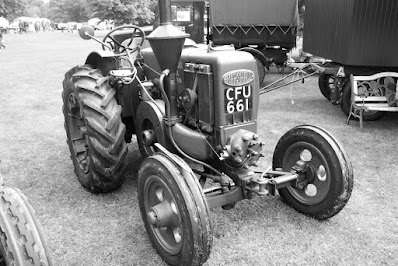 "...English-built, four-plow, one-cylinder, diesel tractor."
(The one-cylinder can be seen protruding from the front.)
Great video showing how tractor "purrs" and also being started with a shotgun shell
Home