Ten days before Christmas, in the dark of the night, a stranger on foot came to our house to seek shelter for the night. No, it was not a pregnant wife like the Christmas story of old, but a man seeking a place to rest his weary body. This stranger was from Newark, Delaware. He was told by a teacher in Spokane that I’d be interested in his commitment to health. We were glad that this rare specimen chose our place for one of his rest stops.

Naturally an explanation was in order for him to clarify the air. Especially since he arrived on foot from Spokane in the middle of a cold wintery night. After learning that he turned his body over to medical science, I decided to tape his story. He said he gets by on five hours of sleep, so we didn’t mind keeping him up way past beddy time.

Here is the gist of the experimental way that this guy has been living for the last two years: Thirty-seven year old Rob Sweetgall from Delaware spent 12 years behind a desk, making lots of money as a Chemical Engineer for DuPont Company. As time passed, he began noticing it was getting harder to see his belt buckle when he looked down. His growing well-shaped pot belly was blocking the view. Then a large proportion of his family began keeling over from heart attacks. Realizing he would soon be reaching middle age, with a family risk factor, Rob junked his job.

After working out a medical and vascular program, Rob was able to find several good sponsors, including DuPont. They all fulfilled his dreams by putting him on the road as a perpetual walking guinea pig.

So from October 1982 to July 1983, Rob had to run and walk through 37 states, a total of 10,608 miles, and talked to about 100,000 youngsters on the importance of physical activity, and how to stay off the bad stuff by putting good stuff in their stomachs. Mr. Sweetgall rang a bell when he said his diet includes lots of peanut butter, and no red meats. He throws egg yolks over the fence like I do when I want to down an egg.

This fall, Rob got his sponsors to enlarge their testing on him. After being interviewed by Jane Pauley on the Today Show, he put his feet to work again. This time his contract called for propelling himself through 50 states in 50 weeks, including shuttles to Alaska and Hawaii. When he walked into our house, he had knocked off 3,070 miles from his scheduled 11,600 mile trek that will get him into Manhattan, New York on September 5th. It’s a fast long walk for the health of it.

Even though I’m a health nut, it seems like what Rob is doing is more than is needed to stay alive. Course it’s all done for vascular study that could benefit all of us. I still think if a person runs four or five miles twice a week, and adds a weekly swim of a mile or two, it’s enough to make you feel all shiny and new. Some feel more comfortable doing much less, fine - do what you can, the benefits are the same.

Energy levels vary in different people. When Mr. Sweetgall came clobbering in from his spurt from Spokane, he took his shoes off, and plunged his naked feet into a snow drift a couple of times for cooling off purposes. His body burns food rapidly, so he eats ten times a day in light doses. It takes 4,500 calories a day to run his fuel efficient body. He wears out a pair of shoes in about a million footsteps or 16 days. Twenty pairs of Rockport shoes are expressed across the county to meet him at designated post offices. Rob averages 45 miles a day. He is truly a man with a mission.

His five pound fanny pack is a magician’s wonder. Out pops some foot powder and ointments, waterproof socks, road maps, schedules of all the towns, with dates where he is to speak, record sheets for keeping track of every parcel of food that passes his lips, camera and slides that he uses for lectures. Also a normal size toothbrush.

Rob is sent back to his sponsors by plane every few weeks. His body is then run through the laboratories. He is then dumped back to where his feet made their last tracks. The sponsors are spending $100,000 on this guy.

After Sugar made him a stack of peanut butter sandwiches to last him to Wilbur, Rob Sweetgall then disappeared into the fog and snow. Plans were made to meet Rob Tuesday morning outside of Coulee City somewhere for a grandstand walk with him into Waterville, and to take in his scheduled speaking engagement. He called up that stormy, stormy morning, and told us the road was closed to Waterville, but to come anyway and try to detour. Having no desire to buck such odds and to become a statistic, we declined.

When Robert finished [this] walk over the Brooklyn Bridge, he was accompanied by hundreds of people and an elaborate media affair. The screenwriter for a future 'Forrest Gump' happened to be a spectator that day. (Idaho Statesman Obituary / Legacy.com) 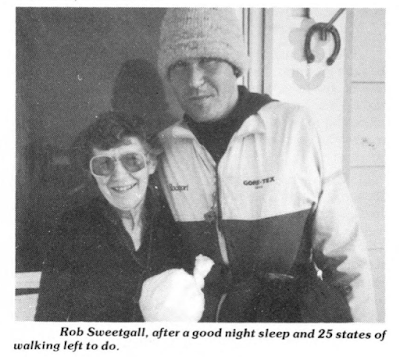 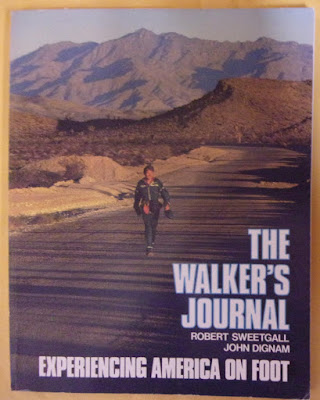