All That Down-Draft Feeling

Do you realize that 62 years ago, there was no living proof that a flying machine (airplane) had ever passed over Lincoln County? Just think what has happened since. Those heavier than air flying things have put the passenger train and over-seas boat travel out of business. Sunday an Aerospace Day was to have been held at the Fairchild Airforce Base. It drove a point home that staggers the imagination.

Let’s go back to more than 60 years. It was on a late spring day in 1918, that a plane few over Lincoln and Douglas Counties, disturbing the air above the wheat fields for the first time. The light double-winged thing came up from a rest-stop at Wenatchee and passed over many a sky-gawking farmer as it wobbled it’s way to Spokane.

On that cloudless day, we kids stared up at the sight of our first airplane, and so did Ben Hall, our neighbor. He unhitched his plow team early that evening and walked down to our place. Naturally, the first question he asked was, “Did you see that flying machine?” Ben got hooked on Bible prophecy, and had left the Evangelical Church for one that practiced “we are living in the last days.” Seeing his first flying machine overhead fortified his beliefs.

Things really happened fast after that. Later that summer an airplane that must not have been put together very well, clunked out and had to land a mile southwest of Rocklyn right on top of George Borck's tallest hill. Riding on the thing were a father and son who were trying to air-hop over to the coast.

My dad cranked up the Model T and we all went to where the excitement was. The old guy was the mechanic, and his son the pilot, [and] had his legs shoved into a couple of leather leg clamps. When he got close to the plane, he usually put his goggles on over his Eskimo-looking cap. By nightfall they gave up trying to make the thing fly.

The plane spent the next three weeks setting in the stubble field doing nothing while waiting for repairs. It did have a lot of company on Sundays after church. The old Brownie cameras were popular among the farmers in those days. Posing in front of this crippled plane was a big deal. The father and son could have made some spending money by charging for their outdoor photo gallery. The front end looked like an old-time, long-nosed car with the propeller sticking out of the radiator.

The George Borck family treated the two flying dare-devils like kings. Between rustling parts, they got free board and room. Finally the day came when all the bad stuff was eradicated from the motor, and good stuff was put in. The Borcks were promised a free ride in the sky. Bertha and her lifetime friend, Rose Bartlett, were the first brave ones to crawl into that rig. The open-air plane left a large part of their bodies sticking out into space.

The goggled-eyed pilot pulled the plane high over Rocklyn, then the damned propeller shook off. All the two women could do was scream all the way down to earth. The pilot was able to squeeze his cargo and the flying machine between the Old Maurer house and the George Sweezy farm buildings.

Supper was late that evening, because Mrs. Borck was a bit woozy from all that down-draft feeling. It took the sky-rovers over a week before they could find a place that had a propeller already whittled out for them. When the plane was able to hold together, they left, taking all the excitement with them, and leaving us with an empty feeling.

About a month later, the Borcks got a letter from the pilot’s dad, stating his son lost his life while trying to train a future pilot not to fly into barns; which he did, killing himself and the trainee. 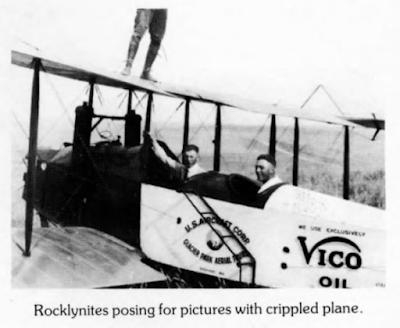