To Prevent Arousal From Setting In

I sincerely believe that swimming in indoor pools will help cure cranky husbands and wives when winter cabin fever sets in. There is no better therapy than when the body enters a large quantity of water that’s under temperature control. The crippling condition that made Franklin Roosevelt immobile throughout his productive life was helped by plenty of year round swimming. In those days large heated pools were scarce, so the President had to head for Warm Springs, Georgia, where he could exercise in the buoyancy of water that was not too cold.

The summers of lake swimming are really neat, but every fall the receding sun brings forth outdoor anti-swim weather.

Sugar and I have been doing year-round swimming for over 40 years. All of us were made to live close to nature and that includes plenty of water. Kids, given the opportunity, will take to water like fish. Whether you want to believe it or not, people with great knowledge tell us that the ocean is where all life got its start. Of course, that goes back one heck of a long ways. So let’s just go back to the 19th century when the Victorian age was still in power and was dictating the proper way to keep the body clean.

In England some medical books during that period didn’t advise taking a bath during the winter months. To make matters worse, this rule was handed out before body deodorant was invented. Instead, they advocated the use of a body-sized tent with a hole in the center for the head to stick out.

Under the stool they used to sit on, was a iron pot filled with hot coals. The belief was that sweat oozing form the semi-barbecued body was supposed to cleanse the skin of all impurities. What a step backwards! Especially since centuries before, the Romans were building and using luxury public pools.

Not too long ago, during a YWCA celebration, a large picture was hung on the wall showing an early day swim scene in a mill pond near Spokane. They were all wearing woolen bathing suits heavy enough to sink a good swimmer. A large size rope was strung across the pond to divide the men from the women to prevent arousal from setting in.

The summer of 1929, I went to Lake Coeur d’Alene in just a pair of swim trunks that were sent to me from a relative in California. I was told by vacationing friends that I may be run in. It spoiled my water fun ‘til a guy from the south was vacationing in the northwest. When he swam by, he too was wearing a topless swim suit—again, we have come a long way. 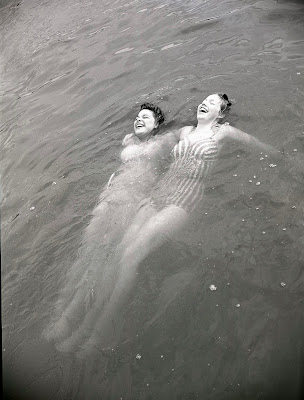