by Walt Kik
Edited by Phil Krogh
Places
Bluestem    Creston    Davenport    Egypt    Harrington   Ruff    Mondovi    Odessa     Porcupine Bay    Ritzville   Rocklyn       Sassin/Rock Creek    Sprague    Wilbur
Bluestem
On a Friday night in January 1985, the Bluestem Grange gave me an opportunity to tell what I knew about early day Bluestem. We had a perfect setting for talking over the early days of Bluestem. The foggy weather had a way of knocking out the electricity. The whole Grange ritual and the lecture hour was conducted by candlelight, just like in the old log cabin days.
This flickering light event was held in the old two story school house. The upper part was never used as a school. It was built by settlers who had dreams that this railroad station would never stop growing.
In 1892, when the Great Northern Railroad got its tracks laid as far as what is now Bluestem, they drove a Moscow sign into the bunchgrass. Settlers took up the hint, and began building a frontier town. It grew to the size and shape that would have made a perfect setting to suit the modern movie producer of today. All the buildings condensed for "Frontier Town, USA, were there.
A well traveled wagon road that fed this town, crossed the railroad tracks as it entered main street. Rows of seven shed-like wheat warehouses occupied the railroad siding. Also a depot, and section house. 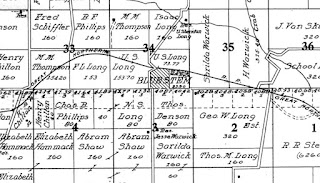 “One block east and one block south of this monument, sets the remains of an early pioneer factory. When the 20th century was hardly 15 years old, two daring guys, Lew Dunning and Charlie Erich, strayed into this humble burg from California.
"They figured this frontier community deserved a harvester that would be precisely designed to fit the rolling, volcanic hills of Lincoln County. They sold stock and got farmers excited enough to invest. Lots of lumber and iron were shipped in, and soon this factory gave birth to lots and lots of harvesters. They were all christened "Harrington." Later this factory even molded and assembled its own combine motors.
"These part wooden and iron machines soon graced the wheat fields for miles around, causing inferior imports from California to slow down to a trickle.
"Straight outdated chain hitches to pull these rigs were very cruel to all mules. Two local inventors, Talkington and Green got busy and made hitches of their own design so the new harvesters could be pulled without causing the animals to rupture. A third humane inventor, Shendonie, brought his own hitch with him from California. As many as 32 mules could be hooked together for pulling purposes."
“This monument was put up by the local Historical Society for the Prevention of Lost Records.” 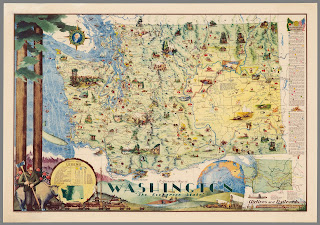 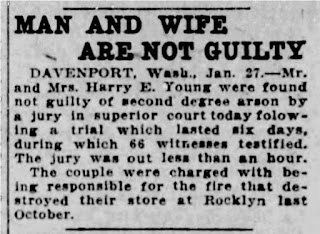 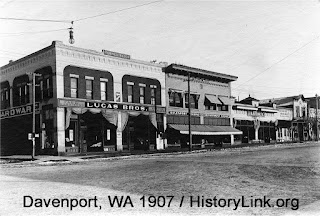 There were five grocery stores in town during this period, Piggly Wiggly, Burgans, Allen’s Grocery, H.H. Granger Food Supply and the Farmer’s Store that was run by the Campbell family. In those days most Davenport food outlets did not let you gawk around for your staff of life. When it came your turn, the clerk would look over his glasses at you, with his ever-ready pad and pencil in his hand, and ask what you wanted to take home. If you said three cans of
corn, he would wet his pencil and write down three cans of corn, and put the price down just to the right of his pencil. When you finished reading off your list, the clerk would walk around in different directions filling a box up with your pre-dictated order. If you were not a deadbeat, you could pay for it later.
Come late Saturday afternoon, away out in the rippling horizon, many a farmer were unhooking their string of work horses at a shockingly early hour. After all, Saturday night was starting to arrive. Even the horses had a feeling that this was the evening for that extra bonus of rest and would tear down the home stretch. Only a steady pull on the lines kept the nags in the proper working range, and when you said “whoa,” you had better grab ahold of a piece of your combine, or whatever, or else you’d lose your balance.
As the skies darkened, Davenport took on a carnival atmosphere. The streets were used that night for congregating groups to stand on and visit. The early arrivals were able to get their hair blocked into its original shape while the barber’s scissors were still sharp and before the row of barber shop courtesy chairs became full of shaggy dogs waiting their turns. The first evening showing at the motion picture house was usually full of town kids.
The peak flow got parked and into the streets by 7 o’clock, then from nowhere and other odd places came the strangers that were looking for a harvest job. These guys exposed their professional trade by the symbols they were wearing. For instance, if these weather-beaten guys were skilled sack sewers, their hat would be punched with a sack needle just deep enough to miss their skulls. Twine was neatly folded around the exposed end of the needle. If his hat happened to be leaning on the side of his head, it meant he was a cocky sack sewer and could not be snowed under. Guys with their legs slightly bowed and with a new pair of leather gloves sticking halfway out of their hip pockets were looking for a job of driving all those horses that were needed to pull your combine. Then, the rather nervous guy that wore a cigarette in his mouth and a Bull Durham sack in his shirt pocket was just looking for anybody that would hire him.
Not only strangers mingled with the farmers, city folks would stray downtown after supper to join in the fellowship. Senator Charlie Myers, if he was in town, could be seen visiting with the farmers and the fair sex. I remember old Doc Bumgarner; he would hit the streets during the peak hour. He was rather a stout man, with an ever-present cigar that would never leave his mouth unless he had something to say. Greetings were usually a friendly nod, and he would lift his hat off his head when he saw a lady. 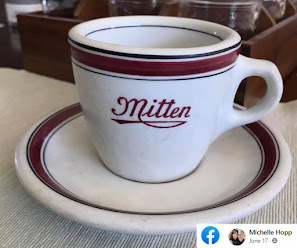 Pool halls did a landlord’s business. Loss of body moisture during the week was being replaced in the smoke-filled halls. Some of us not-so-hardy guys were doing the same thing up at The Mitten. Also, that’s where some of the young ladies hung out. There was never enough time to talk over current events. Crop yields were either excitingly exchanged, or
disappointingly told. Nine pm arrived too soon and most of us left our sloppy way of shopping until the last minute, causing the store keepers to leave their door blocks under the doors much longer.
Finally, when the stores pulled in their rugs, the lady folks started to pile themselves in their family cars. These tired farm wives would beckon some of us street stragglers over and ask us to get their respective husbands out of the pool hall so they could get home and into bed. Usually the farmers that fell for the pool halls were card players and would play for hickies (fake cardboard money). The hickies had to be spent right there. If those “fun on the town” farmers were lucky, they may have won enough hickies to take home a week’s supply of tobacco or snoose. While cards were being dealt, a tap on the shoulder was all that was needed to get their attention and response. “Tell her I’ll be out pretty soon.”
There are now very few left who used to get tapped on the shoulder to get the wife home Saturday night at a decent time. Some that were looking for work then are farming today or retired. It all seems like a dream.
"Looking For The Heart Of Saturday Night"  Kik-Backs, page 55
Mondovi
There was little acknowledgement of Mondovi in that excellent Centennial Special that the Davenport Times put out in 1983. Sugar was asked if there was anything about Mondovi in the ‘controversial’ Centennial Cookbook. Well, very darn little. Between how to make Mennonite Chicken and Squirrel Soup, there is a paragraph on Mondovi.
Since so much has been written about Rocklyn, it’s a shame Mondovi has been forsaken. After all it’s the same distance from our county seat as Rocklyn is, except you've got to go in a different direction.
In 1889 the railroad missed Mondovi when it was building its way to Coulee City. So the town had to be moved down to where the railroad tracks were. According to records, when Mondovi became Mondovi there were only 16 humans inside that proclaimed spot. However, when a sawmill got going, the usual frontier buildings began to appear. It helped Mondovi turn
into a mini town. A blacksmith shop went into business mending broken rigs and farm equipment. The chop and feed mill supplied supplemental food for a lot of animals. A well cared for cemetery is still doing business on the outskirts of what is left of this burg. 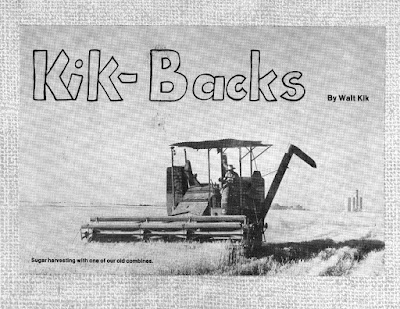 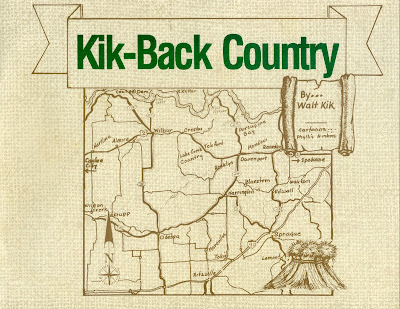 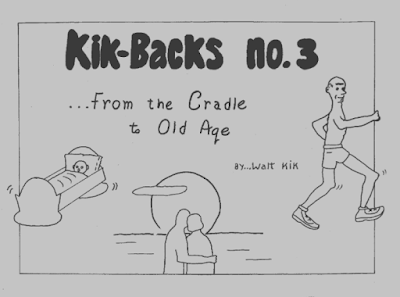