While most of us have picked the heavier traveled rat-race road of life, some didn’t. There is a fellow citizen in Mill Canyon that is years ahead of us in lots of ways. He is at peace with his environment. After he chose this spot, this guy tried making natural gas do its thing for him, and now is making electric juice from the sun to run his radio and other knick-knacks. He is doing wonders by making solar heat work. If the wind could be steered downhill, I believe Rico would put the circulating air to work.
Who is Rico? He is a handsome bearded guy with sparkling blue eyes, and his body has no weight problem. Rico Reed is active in politics, and is Lincoln County Democratic chairperson. He wrote numerous thought-provoking comments for the newspaper and a magazine on ecology. Is also a member and distributor for the Inland Empire Solar Energy Association. When it came to clean air, Rico had his own campaign going, long before the ‘Blue Sky Advocates.’
When this fellow is not busy laying floor covering for Warrington’s Furniture in Wilbur, he busies himself in his latest project, a two story, well insulated solar heated shop, where the mechanical part will be operated by steam power. (That’s a story in itself).
What’s it like down in Rico’s world? Well it’s much closer to nature than the famous Duncan Gardens. Things are spread around a bit, making it easier to find usable stuff. This deep canyon holds a neat creek. Winter smoke curls from the neighboring homes, but not enough to cause smog. Cars are still allowed to be parked anywhere.
Rico’s home is a rather modest, three-story, A-frame house, that has everything in it to make him happy, including a lemon tree that bore forth 40 lemons last year, and a greenhouse for living vegetables the year around. He made an indoor hottub, that will hold approximately four adults in standing position. When the sun refuses to shine, outside shutters can be pulled across the transparent house siding, by pulling an inside cable. A miniature swim pool with a slide for tots, awaits in the yard for summer usage.
Rico’s first solar heating hose was laid in the sun in length long enough to shower two fat people or three skinny ones before the cold water caused a quick retreat from the shower head. He has now installed a collector and a heat retaining tank, making it possible to shower in sunless weather.
Years ago, Rico gave Sugar and I a guided tour of his factory that made natural gas from “you-wouldn’t-believe-it stuff.” It turns things into liquid, then funny things begin to happen as it becomes gas. When Rico saw that I noticed the roof over his refinery was setting lopsided, he explained to us that the works blew up when he was setting in the other part of the house. Minor adjustments had to be made before natural gas was again flowing through pipes to lamptaps and other whatnots.
Rico had held a one man solar display up at Riverside Park for the public to look at and ask questions. Harold Balazs is a sculptor-artist. His art adorns the interiors and exteriors of several Spokane banks and churches. He held an art display at our church. Seeing Sugar looking at some portrait sketches, Harold said to her, “You should know these people. They live out your way.” Rico and his friends did some modeling for S.F.C.C. art school, broadening their experiences between working and figuring out how to capture nature's energy.
"Looking Inside Rico’s World " Kik-Backs, page 79 (home)     (thread) 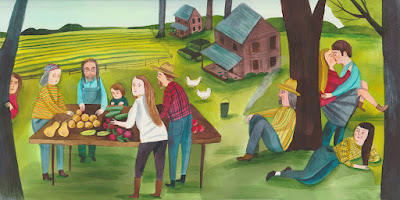 A Trip to Tolstoy Farm / Longreads.com
Illustration by Giselle Potter 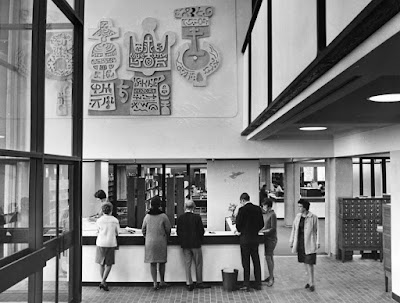 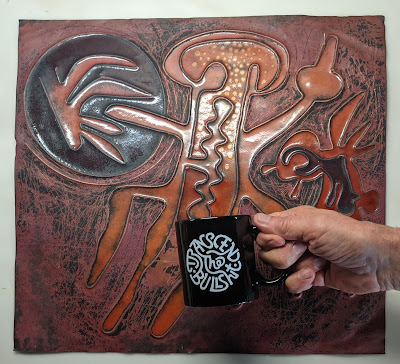