Before the turn of the century, the idea of a pioneer picnic on Crab Creek entered the minds of our early settlers. The first picnic was on the primitive side. The tall grass was their chairs. Songs and speeches were heard echoing through that wide coulee. For horse racing, they used the trail-like roads that wind through pastures and fields. Foot races took place where rocks and sagebrush were scarce. For that one day outing, everyone brought enough food to keep their bellies full.

In 1902, this pioneer group got big enough to turn itself into the Lincoln-Adams Counties Historical Association. To be a member, all you had to do was to have lived around here before Washington became a state.

That active bunch really went to work down on Crab Creek. They laid out and built all the things needed to make those pioneer people happy for three days. An authentic horse race track was scooped out, and a large grandstand was connected to the track. For evenings of paired-off closeness, a good sized dance pavilion was erected. A midway was laid out for hucksters, a merry-go-round, and a speakers stand for acts of entertainment. One year a pretty lady did some death defying stunts from a smoke filled balloon that was on its way to the sky.

It’s too bad that more of these pioneer picnic events were not put down in writing. All we have now is just a mouth to mouth recall of past events, that can get lost through repetition. The time I attended was the year the depression put the picnic on its last legs. My dad’s highlight of the picnic was the year his life long friend Max Mecklenburg was busy showing off Lincoln County’s first airplane to the crowd. My aunt Minnie won all the foot races for her age group while living at Edwall. All relatives of pioneer families had similar stories to tell.

Fortunately I have received quite a few letters that have a lot of authentic old time information. Upon reading Kik-backs, Bob Harding of Sprague was reminded that his old uncle, Johnnie Harding went with the Kik brothers to homestead in the Lake Creek area. Bob then called me up and told me that Ruby Harding, Johnnie’s half-sister is still very much alive, and has been living in Los Angeles since 1920.

This exciting news caused me to send a letter to Ruby. The information I received from her was like hitting the jack-pot. She remembers so well when, as an adolescent, she attended those early day Lincoln-Adams County picnics. Her letter of recalls is unique and historical. With her permission, here are the important contents: 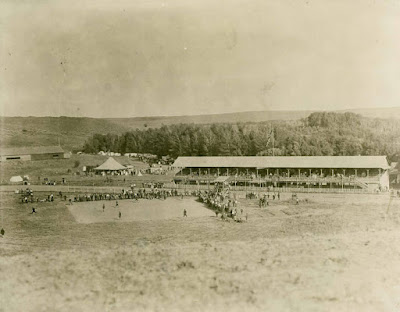 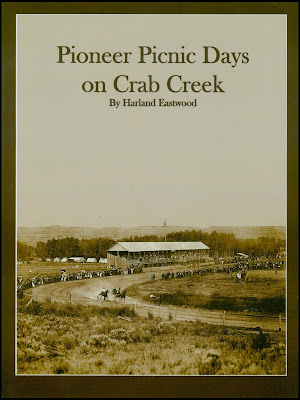 Ritzville/Adams County Historian Harland Eastwood
Letter from Ruby Harding to Walt Kik
“Dear Walt. I enjoyed your book very much . . . John Harding was my half brother. He used to tell us stories about the days he and Charlie Kik worked for Jack Lucas on the Figure Three Ranch near Sprague Lake. He was always a glamorous figure to me. Very gentle, but lots of fun. He used to come home every fall to help father hunt wild geese, sage hens, and prairie chickens which abounded in those days, also to take the current school ‘marm’ to a couple of country dances.
“My aunt Agnes’ husband, George Tufts used to tell us stories of Wild Goose Bill . . . What a character. The Chappels you mentioned were our neighbors up Lords Valley ... I saw Will Rogers once in 1921. My mother’s foster sister Lois Miller, was working at the Beverly Hills Hotel. I was visiting with her when Will came through the lobby wearing a sheepskin coat and rubber boots. He stopped to give Lois a message, and he gave us both a cute grin.
“I used to camp with my aunt Georgie and her husband Myiell Miller every year at the Pioneer Picnic. It was the main event of the summer. Charlie Bethel would hold forth in the speakers stand. Sleepy Armstrong usually won most of the horse races. Sleepy later became quite a figure in the racing business ... I have a copy of his history which was written up a few years before he died, I’ll send it to you . . . Then there was Mr. Carrico and his Merry-go-round. He had been an old circus man, and it was through the circus that he acquired the Merry- go-round. . .It was of normal size, the same as you’d see at any amusement park today. It was run by a stationary steam engine, and played music. We country kids were fascinated by it. Young couples and a lot of older people rode it...
“One year the picnic featured a balloon ascension. We were all thrilled when the balloon was inflated and rose very high into the air, carrying a very fancy looking girl in pink tights, who would perform stunts on a trapeze suspended from a cage of the balloon.
“That was before the automobile and good roads. There were barns to take care of the campers’ horses. Some horses were staked out to grass in a nearby field. There were wagons, hacks and buggies parked among the trees . . .
“Before long we had a stage couple from Spokane who came every year to entertain us. They would set up a platform on the ‘midway’ and sing and put on skits. Both had good voices. She wore her hair very short and was ‘stagey’ looking, about forty, which we kids considered very old. She always sang, ‘If the men were all transported far beyond the northern sea.’
“The ‘midway’ was occupied with all kinds of booths, where one could buy all kinds of trinkets. Souvenirs, banners, pictures, etc. Also ice cream and cotton candy. Walt McClelland, old Russell Bacon’s nephew, who resembled Andy Gump was there writing and selling calling cards. He was a fantastic penman, and had taken many prizes for his fancy scrolls, birds, etc. . . After the ballroom was added, the picnic became more popular than ever with a very good orchestra.
“The period between the Spanish American War and the first World War was a great time to live in the country. People seemed happier and more secure then. Also our language was intact. “Gay” meant only light hearted, and a ‘faggot’ was only a bundle of sticks prepared for burning...
“Those were the days, but we tend to forget about the bad things. The flies for one. Where there were horses there were flies. We had fly poison and tangle foot all over the house. And there was the dust which one kicked up whenever one went, and the chuck holes! Thank God for Mr. Macuham who gave us better roads. I’ve lived in California ever since 1920, but I’m still a ‘Country Jake’ at heart.
“Aaron Miller, my step grandfather and family were the first to promote the picnic. Others were the Baldwins, Gees, Kitty Johnson and her husband, Jake Smith who fought in the civil war . . . and a group from Ritzville.
“There are a lot of old characters 1 could tell you about. You’re too young to remember Joe Pickle, Tom Lakina and his nephew Tobe. Anita Malinado and her step father ‘Old Grizzly Revenaugh!’ The only old timers I know in Harrington are George Umberwast and Frank Gately.
“I remember well those pioneer picnic days . . . Besides the entertainment, getting together to catch up on local news, sharing picnic lunches, having foot races and other games...In addition to horse races there were baseball games and a pretty good track meet. People came from all over for these events . . . One year we came home in a header box. You have a writing style reminiscent of the sagebrush and scab rock of that country.”
Love, Ruby