Nowadays we have good Republicans in office. We don't have to get ourselves in a dither about one party control. So, at this time, let's not worry about getting too many Democrats into power. It was different years ago during the Roosevelt administration. They had a lopsided Democratic government. Up to 97% were sitting in office. That's just a little too many. A few Republicans should have been thrown in for some balance. Otherwise, it became a breeding ground for crocked ideas.

For instance, Huey Long and his utopia plan ["Share Our Wealth Plan"] was one. How many of you older folks remember the Townshend Plan? Good! For those that don't, it was a farce. A guy by the name of Dr. Townshend was a California dentist who got tired of pulling teeth after a brainstorm hit him.

He figured everyone over 60 should get $200 a month from the government. It would have been equal to $1,500 a month now. If grandpa was too old and liked to snore a lot, he was supposed to let junior go out and spend it. That was supposed to bring prosperity and the money would somehow get back to the government vaults without collecting a tax.

I never could figure out how they could convince junior to go out and find a job if he was busy helping Grandpa spend all that money. When the Townshend Plan hit Davenport it was amusing. A Townshend disciple got permission to use the courtroom at the courthouse. Meeting notices were tacked up around town.

A bunch of battered-up old guys that had just gotten through loading themselves up on New Deal beer at the pool hall were able to make it up to the courtroom. They were all ready and eager to help put the nation back on its feet. However, they did irritate the speaker a lot by applauding at the wrong time. We all know now that Social Security was the only sane approach. 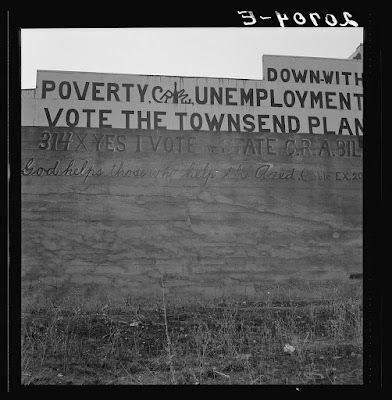 "The neighbors plastered our shed while we
were gone. It didn't pay to advertise that year."