Renting My Muscles Out

In 1919 my dad got a brainstorm and rented the farm out, then moved us all down to southern California. That depressing event lasted 'til 1927 when, luckily, my dad got wiped out. That caused us to move back to good old Washington.

I worked for Walt Knott for two years - the only experience I had of renting my muscles out for twenty-five cents an hour. The old guy got to be quite a big-shot after I left California and came back to the promised land.

Since then, he moved in a whole pile of shacks and what-not from the desert and opened up what is now known as "Knott's Berry Farm". I still think the most interesting place to see is the restored mining town out in the Mojave Desert called "Calico". When I saw old man Knott seven years ago, he said he turned Calico over to the state of California and it is now operated the same way as the Hearst Castle at San Simeon.

While living down south, my folks in the spring of 1925 bought a 15-acre ranch and accessories including an old-time International 8-16 tractor. A Mexican named Jim was thrown in on this package deal. Jim farmed this place until I legally quit school upon reaching the age of 16.

I no more got to tear around a little with the old tractor when my dad decided to divide and sell most of the ranch into two-acre tracts. I was sorta left flat-footed. A ray of sunshine entered my young life when this little guy Knott rented 15 acres across the road from us. A few years before he had rented ten acres down the canyon near Anaheim where he lived with his wife and four sprouting kids.

This valley was full of honest, hard working folks that came from Oklahoma or Missouri with pockets empty, but were satisfied if they were allowed to survive. Walt Knott and his family came from this same background but he seemed to have more guts and must have had a little silver in his pockets. We were the only family around there that came from up north. Two of our neighbor lads rode out with their folks and step-kids from Missouri in a broken down old truck.

A typical young, lanky okie that always had a large chew of tobacco in his mouth; he hauled his mother and some tame rabbits out from Oklahoma in and old Hupmobile. He wanted to marry my sister, and later when we left, he became a foreman for Knott. A few years ago he stopped in to visit us. Now he happily owns his own berry ranch in Oregon.
"Working On Knott's Berry Farm" Kik-Backs, page 9, Part 1 (continued)     (home) 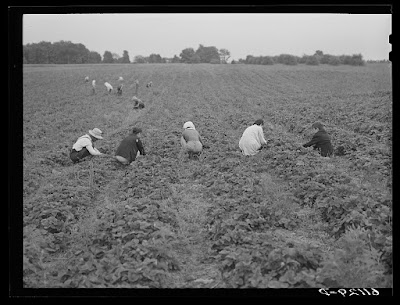 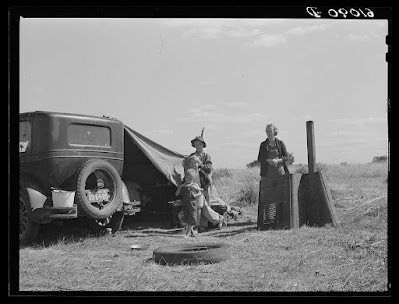 Vachon, John / Library of Congress
Renting my muscles out
In 1968 I was 17 and it seemed that everyone in Shelton was making money in Christmas trees. All my friends had an uncle or knew someone’s uncle who dabbled in his spare time in the tree business. Or so it seemed when I answered an ad in The Journal to harvest Christmas trees on weekends for a local entrepreneur. Saturday morning six of us climbed into the back of a large flatbed truck and hung on to the fenced sides. We were the “draggers”. Two “fallers” rode with the boss in his pick-up as we followed him towards Lost Lake. Several dirt roads later, in the middle of nowhere, the boss explained to the fallers where to cut. These trees weren’t sheared or planted in rows - just spread out over a large area with all sizes of Douglas fir. Three draggers followed each faller who was equipped with a razor-sharp, double-blade ax. They were fast - two or three swings and onto the next tree. We tucked four or five trees under each arm, tromped back to the truck and tossed the trees up over the sides to John Dibble, who stacked them. The farther we got from the truck, the farther and faster we had to drag the trees. The underbrush was so thick with moisture that I was immediately soaked and became chilled to the bone. I didn't know to wear rain gear. By noon the truck was full. We hung onto the top of the pile and drove to John’s Prairie where we unloaded at a tree company yard.
At lunch break we were all too tired to talk but it didn't matter because John Dibble wouldn't stop talking. Stories working in shipyards in WWII, stories of fights he won and fights he lost, riding trains and hitchhiking up and down the West Coast. He was the first homeless vagabond, i.e., the first hobo, I ever met.
On the boss’s truck was a bumper sticker that read: I AIN’T NO COWBOY, I JUST FOUND THE HAT! When he wasn’t nearby we took turns mocking it in our best Texas cowboy accents:
Dragger #1: “I Yain’t no Cowboy, I just FOWN’  duh hat!”
Dragger #2: “Ah ain’t no CAW-BOY, Ah jus’ fawned the HAY-AT!”
Me: “Eye yay no owboy, eye yust fine me dee haaat!” All my impersonations sounded like the Swedish Chef.
After lunch we drove towards Arcadia Point and started on load number two. The next weekend I was smart enough to bring rain gear, but they were cheap plastic and fell apart before lunch. Four weeks later, the Sunday after Thanksgiving, was the last day of work — it took the trees a month to get to market. 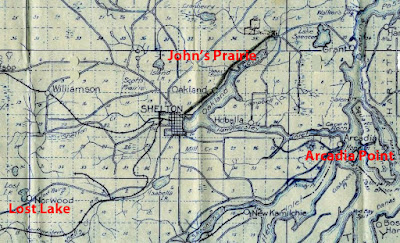