As a young lad, I never knew women were not supposed to be equal. Mother never complained. Also, my tender years were spent in the atmosphere of a slim but over-powering Amazon neighbor that was liberated from day one. Rocklyn citizens were kind of scared of its free-swinging woman. We always called her the "old lady" even though she was only in her late 50's. Alice Marcellus was her name.
We young ones felt safe having old lady Marcellus as our friend and neighbor. That's because she was hard-boiled in a positive and protective way. She chewed tobacco, and we kids figured that's what made her brave and tough. Alice claimed to be related to Jesse James. In those days, being related to some famous crook gave a person certain prestige.
"Old Lady Marcellus" Kik-Backs page 75, part 2 (continued)      (previous)     (home) 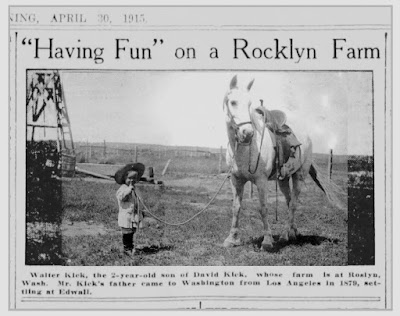 "...as a young lad"
Spokesman Review April 30th, 1915
Alice appears to be related to "a" Jesse James, but not "the" Jesse James
FamilySearch.org