A Scary and Nutty Thing to Do

In the search for  Sugar, I just had to do some moonlighting between my Saturday night cargo. By vacating the car down to one passenger, I was then able to locate a Fayetta, then an Evelyn; thus proving to myself that I could handle dates.

The real break came when Bob Hardy found his Edna. That caused Bob to get married, and that caused the neighborhood to give them a shivaree. Wanting to see what a bride looked like spurred me to show up. After the traditional noise and destruction of a shivaree and meeting Bob's brand new wife, I got to thinking that [it] was no place to start a political argument, so I just gawked around, saying hello to everyone.

All at once, a smiling face met my face. It was Sugar. I thought to myself, "Could she be that stretched-out girl who, not so many moons ago, waved at me out of the school bus window?" She sure did look different since all her equipment had arrived. I knew her when she was a timid little girl. Once I offered my knee to her as a chair, but she rejected me by walking away, carrying her doll upside down.

A week after Hardy's shivaree, we attended a high school carnival at Creston. In less than a month I took Sugar to a wobbly old justice of the peace and got married. A scary and a nutty thing to do, but I found my Sugar. 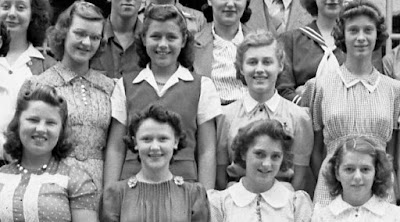 A M Kendrick Collection / WA State Archives
Shivaree: The traditional hazing of our newlywed ancestors / FindMyPast.com
How I found my "Sugar"
In 1970 I entered Washington State University in Pullman. I was assigned to live in Orton Hall which became that year the first ever co-ed dorm on campus. On move-in day the admissions volunteers in the lobby asked me if I wanted to live on an upper or lower floor of the twelve story building. I said I did not know or maybe that I couldn't decide, so they put me in the middle. I soon learned that several of my sixth floor dormmates had said a similar thing and were assigned the sixth floor for that reason.
Connie and some other women were assigned housing in a dormitory eight miles away at the University of Idaho because of a campus housing shortage. Spending those first few weeks of college together naturally created a high degree of camaraderie but when rooms on campus became available they were scattered. Connie ended up on ninth floor Orton but hung out with two of her Idaho friends who lived on my floor. That is how I became aware of her existence. 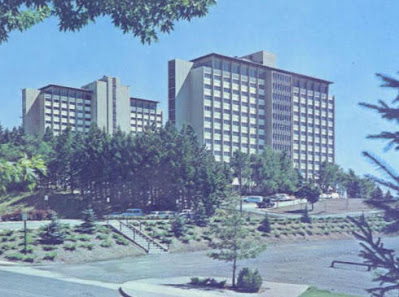 Orton Hall Postcard
One day I witnessed those Idaho friends of Connie's hold her down in the sixth floor study room and place a pet gerbil on her stomach. They probably did it because they knew she would hate it. She scrunched her eyes closed and struggled to get away, but I do not remember her screaming. The gerbil belonged to me. 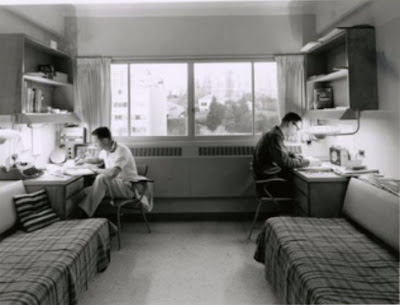 Not my photograph, but almost exactly my dorm room. Rodgers Hall, the twin of Orton, can be seen through the window.
It was the last week of school when Connie and I went out together for the first time. We saw a dollar movie on campus: "The Sterile Cuckoo" starring Liza Minelli and Wendell Burton. After the movie we walked back towards the dorm but didn't go in. Instead, we walked aimlessly around and talked and talked and talked. We were walking and talking around a basketball court when we decided to go inside, around midnight. The elevator had a broken, plastic button which, if you pressed it at the right moment, would stop the elevator between floors. (My dormmates had discovered this.) I stopped the elevator, we sat on the floor, we acted silly, and we talked and talked and talked until the sun came up.